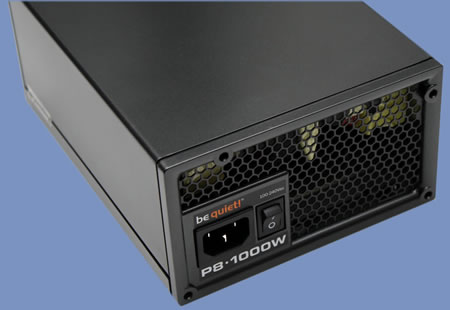 Be Quiet have been in the UK for a couple of years now, and in that time have managed to woo us with some pretty special power supplies. Most memorable of all has to be the original Dark Power Pro 650w that literally took the media by storm and became one of the most awarded PSU's of 2008.

Now in 2010 things have changed and many manufacturers have upgraded their PSU's to suit the needs of the energy concious consumer. 80PLUS Gold/Silver/Bronze level efficiency has been introduced, and the launch of Nvidia's Fermi GPU has once again rekindled people's interests in the high-wattage end of the market.

Keen to keep up with the game, Be Quiet have launched a new revision of their Dark Power Pro series going simply by the name of 'P8'. Today I'm going to be checking out this new kid on the block to find out whether it is a worthy successor to the Dark Power Pro throne.

Let's start with the specs...

This heart opens up unexpected worlds.

Those who have big goals in sight and who put intense demands on themselves and their equipment during professional graphics work or extreme gaming situations will redefine their limits, starting now: with Dark Power Pro P8, the superlatively powerful and efficient computer heart from be quiet!. The new generation of Dark Power Pro P8 is at home in the high watt range, helping anyone who wants more to make a decisive step forward. Starting immediately, the Dark Power Pro P8 universe now contains four models (750W, 900W, 1000W and 1200W) demonstrating (with) up to 92% efficiency (at 230V), earning them 80 PLUS® Silver certification. With Dark Power Pro P8 you′ll experience top performance up close and personal: Powerful, reliable, efficient and above all: quiet.

We′ve equipped Dark Power Pro P8 perfectly for your tasks: multi-GPU ready with up to six PCIe connectors and up to six 12V rails for stable power. The innovative Overclocking Key opens up new dimensions through the manually operated combination of all 12V rails into one single 12V rail. The especially user-friendly cable management system provides you with up to 37 different connection options. The flexible cable exit and sleeved cable protect against ruptured cables. The prize-winning 120mm SilentWings fan provides the quiet operation for which the be quiet! line is known. The high-quality metallic coating and harmoniously rounded corners lend the new Dark Power ProP8 a distinctive look as well. Dark Power Pro P8: this is how your heart beats.

Wow, some very powerful words. Almost brought a tear to my eye. But seriously, this is a power supply we're talking about here Be Quiet, not a new £100k sports car. "Follow your heart"? Surely that's just another way of saying "don't use your brain"? Anyway, the actual bulk of the specs was so wordy that it would have taken up a good two pages of the review, so instead here's a direct link to the website.

To be honest, most of the specs are pretty much what you'd expect to see on this calibre of PSU. There's support for all the latest motherboard standards, sleeved cables, support for multiple GPU's and a variety of safety features. The only thing that seems to be missing is information on what temperature the P8 1000w is capable of holding its full load at. I certainly hope its higher than 25c as mentioned in the MTBF specs, because we're going to be roasting it at double that today.

The configuration of the +12v rails is rather odd looking with three of the rails being capped at 32A, two capped at 20A and one at 25A. Based on this, I can only assume that the GPU power is taken from the +12v4, +12v5 & 12v6, with the motherboard power coming from +12v1 and everything else from +12v2 and +12v3. However, as the P8 has the ability to combine (read:disable individual OCP) its rails into a single +12v rail, in the interest of simplicity this is how the unit will be tested today.