Thanks to an invitation from Samsung, OC3D's TinyTomLogan has been able to attend Gamescom 2022 in Cologne Germany, giving us a glimpse at the future of gaming.

Specifically, Samsung was interested in showing us their latest gaming wares, a lot of which was being showcased at the "Samsung Gaming City", where there was no shortage of gaming PCs, Samsung monitors, and other Samsung gaming products.

On top of Samsung's array of gaming monitors and storage products, we also got a glimpse at some of Samsung's latest TVs, mobile phones, and other products. We will be detailing these and everything else we saw at Gamescom over the next few pages of this event overview, but for now, we will focus on Samsung's new 990 PRO SSD, the reason why we are at Gamescom 2022. 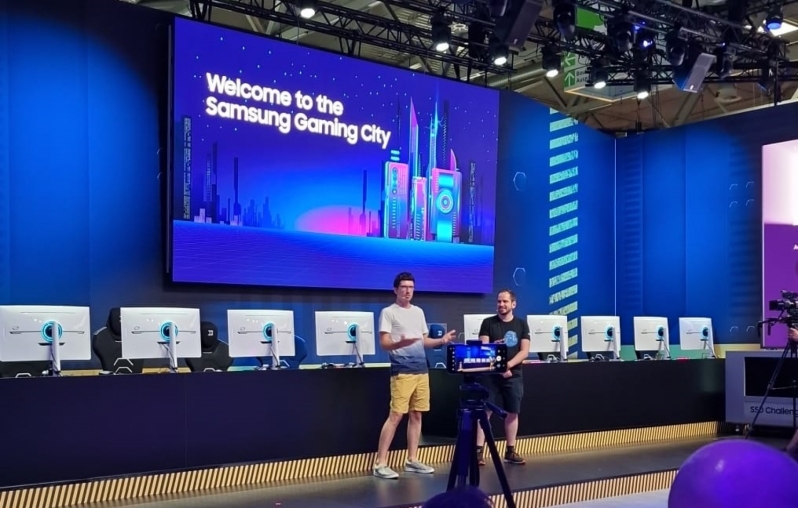 Samsung is one of the biggest names in SSD storage, and is arguably the company that worked the hardest to push the PC industry towards the M.2 form factor and the NVMe storage protocol. For a long time, Samsung was the top SSD manufacturer, with their 950 PRO, 960 PRO and 970 PRO SSDs being legendary drives from the PCIe 3.0 era.

As the industry moved to PCIe 4.0, Samsung revealed their 980 PRO SSD. While it was not the first PCIe 4.0 SSDs to hit the market, it was one of the first to make the most out of the PCIe 4.0 interface, delivering 7,000 MB/s sequential read speeds at a time where most commonly available PCIe 4.0 drives delivered 5,000 MB/s speeds. With the 990 PRO, Samsung's taking its PCIe 4.0 performance to new heights, promising users a dramatic performance uplift in several important workloads.

Beyond raw performance, Samsung has also made their 990 PRO more power efficient, which is great news for buyers who are concerned about thermals, or the battery life of their notebooks.

When testing their new SSD with Forespoken, an upcoming game from Luminous Productions that uses DirectStorage, Samsung claims that their 990 PRO SSD can load the game in around a second, with SATA SSDs taking four seconds and HDDs taking 28 seconds. That means that Samsung's 990 PRO can decrease game load time in an early DirectStorage titles by 4X when compared to traditional SATA SSDs. That's incredible. That said, Samsung did not compare their 980 PRO and 990 PRO in this gaming test. 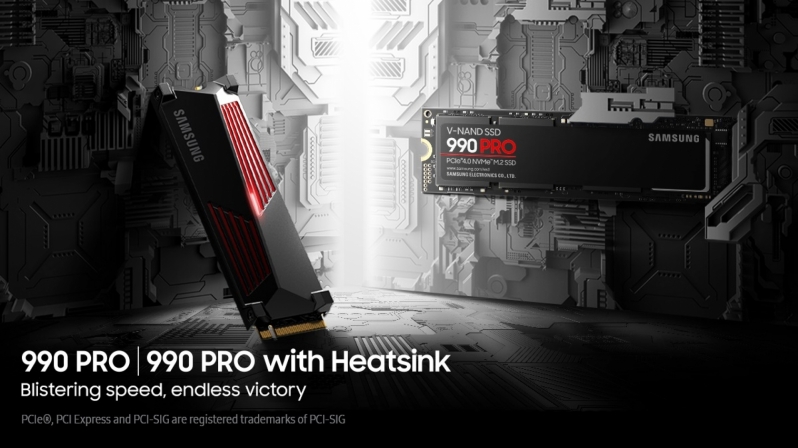 Hitting the limits of PCIe 4.0

Yes, while this performance increase does not seem all that impressive when compared to the 980 PRO's up to 7,000 MB/s sequential read speeds, it is worth remembering that SSDs rarely run at their maximum sequential speeds. This is not the area where Samsung has focused with their 990 PRO SSD, explaining why they have not pushed for PCIe 5.0 support with their 990 PRO. 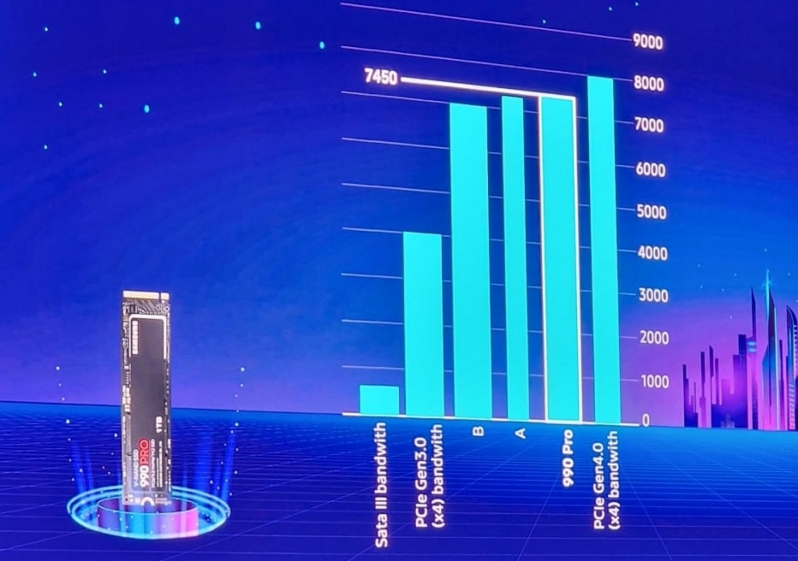 If you look at the hardware specifications below, you will see that Samsung's new 990 PRO SSD uses a new SSD controller, and offer users a significant increase in Random Read/Write speeds.

Samsung's new SSD controller offers users up to a 50% increase in power efficiency when compared to the Elipis controller used in Samsung's 980 PRO. This change results in reduced power draw for Samsung's latest SSD and lowered thermals. For mobile users, this change will result in a longer better life for their system, and for all other users, this will result in reduced thermal loads. For use cases where a heatsink is not used, this will result in less thermal throttling, or potentially no thermal throttling, during heavy workloads. 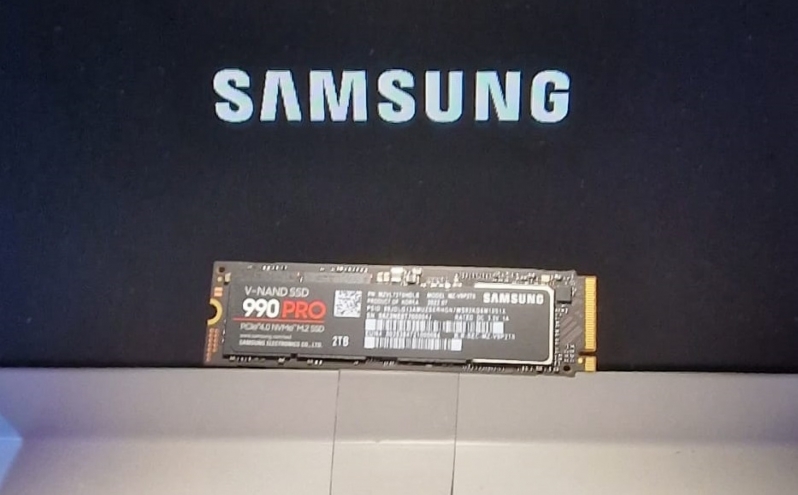 Samsung's 990 PRO will be available worldwide starting this October with the manufacturer’s suggested retail prices (MSRP) of £154.99 for the 1TB model and £283.99 for the 2TB. A 4TB model will become available in 2023.

Samsung are also working on a 990 PRO SSD model that features a heatsink and RGB illumination. This drive will be launched after Samsung's October 990 PRO launch, which will focus on the company bare (heatsinkless) SSD model. 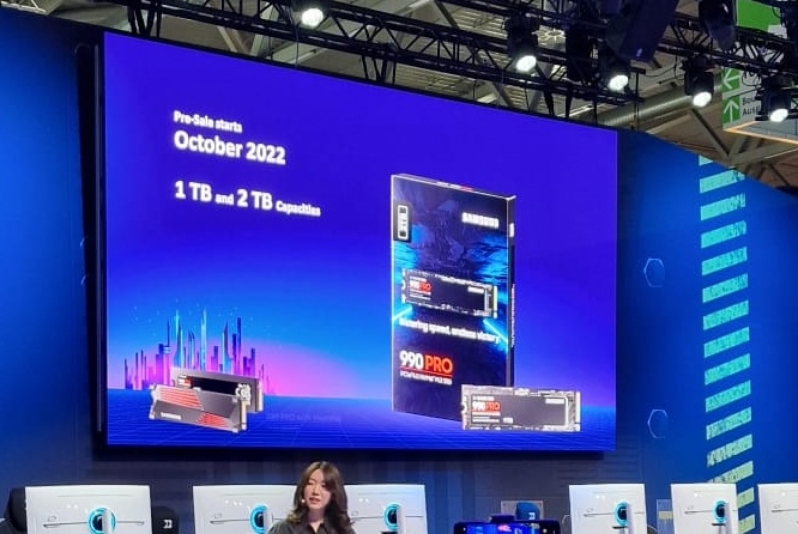