With its headquarters in San Jose, California, Super Talent have been designing and manufacturing memory modules of all shapes and sizes for over 20 years. This may come as a shock to some of us, as in the UK at least Super Talent is a relatively unheard of name.

The Super Talent product line is divided into two major categories: Flash memory and DDR/2 memory. Today I'll be taking a look at Super Talent's high-end overclocker orientated DDR2 memory modules with speeds rated at DDR2-1000 and timings of 5-5-5-15. But first let's take at what Super Talent say about themselves:

The following information has been taken directly from Super Talent's website: 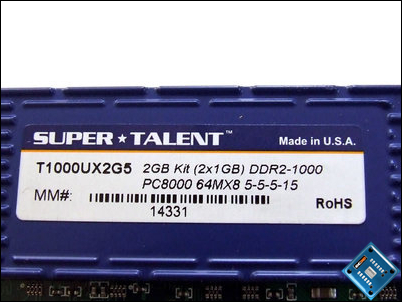 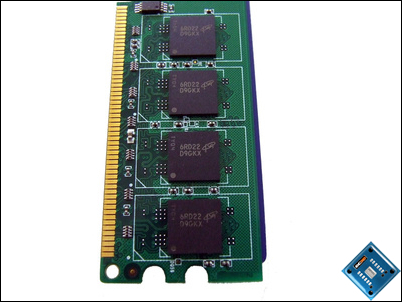 It's great to see that Super Talent modules are provided with a lifetime warranty, however they neglect to mention if this warranty covers the modules running at voltages higher than the rated 2.2v. As these modules are marketed at overclockers it would be good to see the warranty conditions clearly stated on the website.

The T1000UX2G5 modules are double sided and make use of D9GKX IC's manufactured by Micron. I've read mixed reports on how these IC's perform, but in general they should be better at achieving higher frequencies than the D9GMH used by many other manufacturers to achieve DDR2-1000.
«Prev 1 2 3 4 5 6 Next»

NickS
This is probably the first OC3D review I'm really saddened by.

XMS man, please if you have time retest these! GKX's should do 600MHz so easy!

Please make sure you were at

If the BIOS doesn't have the proper RAM settings available, you can get Memset.

Oh, and test with active cooling (of some sort). D9 pumps out a lot better results with a breeze.

JN
Quote:
Its not having it i'm afraid mate. It does very little over 566mhz with stability.

As for active cooling - it makes it a bit unfair on previously tested modules.Quote

NickS
Wow really? That's some TERRIBLE GKX then. Jeez. Most D9GMH does better.

NoL
Could we see a different approach?

JN
Quote:
Looking around, many of the other reviews of these kits haven't done even 566mhz

I just tried again, and its a total non-booter at even 580mhz

The 680i chipset has many more options over the P965/975X so mebe i'll explore some of those tomorrow.Quote
Reply