With its headquarters based in sunny California, Patriot has been producing high performance memory modules under its parent company PDP Systems for over 20 years. Sale of their modules is on a global scale with distributors throughout North America, Europe, Asia Pacific, Middle East, Africa, and Latin America. It would be fair to say that Patriot is better known by our overclocking buddies over in the USA, but have no doubt that Patriot is slowly and surely making its presence known in the UK enthusiast market as well.

Today I've been given the opportunity to take a look at Patriot's top-of-the-line PC2-8500 modules DDR2 kit, with eased latencies of 5-5-5-9. However, before we do this, let's see what Patriot have to say about themselves:

The following information has been taken directly from Patriot's website: 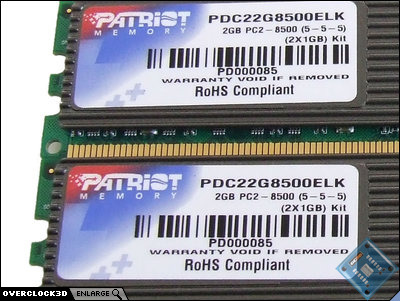 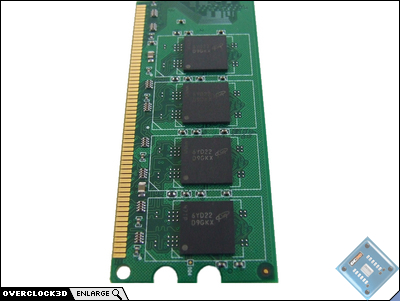 One of the things that struck me the most about the specifications of this kit was Patriot's recommendation to run them up to 2.6v. At this point I'm not sure if this is a typo, as 2.6v seems on the high side for any type of DDR2 memory (especially when it isn't actively cooled), but only Patriot can set the record straight. If indeed they are rated/guaranteed up to 2.6v, we could see some very good overclocking results compared with similar kits from other manufacturers that are generally only rated up to ~2.4v

As you may be able to see from the images above, the PDC22G8500ELK kit is based on D9GKX IC's from Micron. This will be to the delight of many overclockers as most D9 based kits have very good overclocking abilities, respond well to reasonable voltage increases and are also capable of fairly tight timings.
«Prev 1 2 3 4 5 6 Next»

Patriot make some sweet DDR & DDR2...had a set of their DIMMS in my AMD FX based rig...very nice!Quote

JN
Quote:
Cheers & lol, never been called that before

Mullet
Quote:
Had a mate in Uni called James.....always ref'd to

Luffy
Thanks for another great review XMS.Quote

PV5150
Awesome review as usual Jim, well done. I loved the new 'recommended retailers' icon - nice touch. I fixed your link from the review to forum for ya