Introduction & Specifications
Back in April last year, OCZ gave us the opportunity to sample the delights of their latest heatpipe cooled "Reaper" PC2-8500 memory modules. Sporting reasonable overclock abilities combined with an extremely good price, the Reaper kit was yet another top memory product in the OCZ range and managed to walk away with both our "Recommended" and "Value for Money awards".
However, not a company to rest on their laurels, OCZ have been hard at work designing a successor to the original Reaper series and today we're going to get a chance to taste the fruits of their labour... 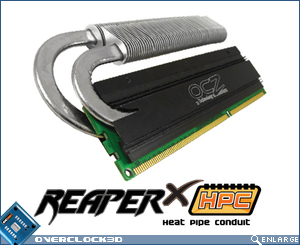 For most of us OCZ needs no introduction. Being one of the innovators in the PC enthusiast market, and with firm beliefs in after-sales service and customer satisfaction, OCZ are pretty much a household name. However, for those of us who have had our heads firmly stuck under a rock for over 7 years since OCZ's entry into the memory market, here is brief snippet of history taken from their homepage:
Entering the memory market in August 2000, OCZ Technology was built around the determination to manufacture the best high speed DDR and RDRAM. OCZ was founded by enthusiasts, for enthusiasts, and our commitment to the end-user has not digressed. OCZ Technology has been an innovator in many areas. We were the first manufacturer to make Dual Channel optimized memory available to the public, which originally took advantage of nVidia's Twinbank or Dual DDR architecture, found in their nForce chipset. We have now taken that technology and tailored it for the Canterwood, and Granite Bay chipset's. OCZ developed and was the first to implement ULN technology, which has been a critical element in our manufacturing process for some time. We at OCZ diligently work to improve communication with CPU and motherboard chipset manufacturers prior to the release of their products. Only in this manner can we fine-tune our memory's SPD settings, ensuring a synergistic relationship between the memory module, memory controller, and microprocessor. In today’s rapidly evolving semiconductor industry, such communication is not simply research, but a necessary component of our manufacturing process.
Anyway, let's cut the small talk and check out the specs of these modules (taken from the OCZ website):
OCZ DDR2 PC2-6400 / 800 MHz / ReaperX HPC / Enhanced Bandwidth / 4GB Dual Channel

These high-performance modules will support the latest games and top of the line multimedia programs with a 4GB capacity, combined with the high frequencies and aggressive bandwidth for maximum system stability. Rated at DDR2-800 with 4-4-3 timings, the PC2-6400 ReaperX provides exceptional latencies for the extreme enthusiast and gamer. The sheer speeds combined with the 4GB capacity of this kit will provide you with unsurpassed reliability, system responsiveness, and stable performance.

Featuring an EPP (Enhanced Performance Profiles) programmed SPD, PC2-6400 Reaper X modules will immediately boot at the rated specs on the latest generation of NVIDIA® SLI™ chipsets. Although the OCZ Reaper X series caters to enthusiasts, EPP eliminates the need for manual configuration and makes the benefits of overclocking available to the complete range of consumers looking to get the most out of their systems.

As one of OCZ’s legendary Enhanced Bandwidth (EB) editions, the ReaperX 4GB kit increases effective memory bandwidth through the optimization of memory latencies between the system memory, the chipset, and memory controller, resulting in the ideal balance of speed and enhanced timings. 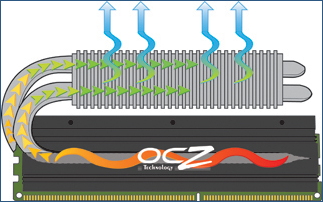 * NVIDIA nForce 680i chipset ONLY

**ReaperX HPC (Heat Pipe Conduit) modules offload heat with extreme efficiency due to a new dual copper heat pipe design. Each memory chip is in direct contact with a thermo-conductive pipe that guides the performance robbing heat away from key memory components and quickly dissipates it through the aluminum fin array. The addition of the extended fin array nearly doubles the total surface area available for heat dissipation while the heat pipes warrant near isothermicity throughout the entire design. The result is a doubling in effective heat dissipation at equal delta t or, in real systems, a significantly lower operating temperature of the memory modules.

***OCZ EVP (Extended Voltage Protection) is a feature that allows performance enthusiasts to use a VDIMM of 2.2V without invalidating their OCZ Lifetime Warranty.
As you'd expect of a memory kit from OCZ, the ReaperX PC2-6400 modules have had every ounce of performance squeezed out of them at their stock speed of 800mhz by running very tight timings of 4-4-3-15. OCZ have added a footnote that these timings are only achievable on the Nvidia 680i platform (which provides support for EPP). However, I'm sure with a bit of tweaking, Intel chipset users will be able to run at these timings too.
OCZ have also given overclockers a bit of extra headroom when overclocking the ReaperX kit by allowing them to over-volt the modules from their stock voltage of 2.1v to 2.2v. While a bump of 0.1v may not seem a massive amount, it's often more than enough to push the average DDR2 kit to it's limits, and it's certainly great to be able do this without voiding OCZ's lifetime warranty.
The images above certainly don't do the ReaperX kit any justice, so let's move on to the next page where we take a look at the kit in the flesh...
«Prev 1 2 3 4 5 6 7 8 Next»

They just look so damn good and preform just as well.. 1100mhz!!

Is it just me or does the percentage at the end not show up??

FarFarAway
I bought these, boshed em in...no tweaking at all and straight to 990MHz. Not had time to fiddle but as you can see there's plenty of headroom

Bungral
Quote:
Was gonna ask if these were the ones you got or if you had the higher ones.. 8800 or whatever it is.Quote

JN
Quote:
Cheers. Twas a bit of a long day and I had all kinds of numbers flying thru my head :sQuote

Luigi
quality review, wish i hadnt got my ballistix now, couldve got got 8gb of this and overclocks to similar frequency's...Quote
Reply