Heat has always been one of the largest limiting factors in PC enthusiasts quest for the ultimate overclock. Components such as CPU's, Graphics Cards and Memory all produce increased levels of heat when using extra voltage to push components to their limits. Until recently, one of the most common ways to disperse this heat was using a heatsink and fan, or in the case of memory modules - a heatspreader.

The heatspreader has been used on memory modules for several years, but has always been subject to criticism by many enthusiasts who believe that their design does more harm than good, trapping heat rather than dispersing it. There is certainly a level of truth in this statement, as many heatspreaders use low conductivity materials and have flat surface areas - all of which hinder the convection of heat into the surrounding air.

One of the more recent methods of removing heat from computer components is using heatpipes. This method uses pipes filled with a small quantity of liquid that evaporates when heated, taking the heat away from the surface. Once the vapor has cooled, it returns to a liquid, falls back down to the heat source and can begin the whole process again. This method has proven to be extremely effective and has recently been used in many award winning CPU heatsinks. For this reason it's no surprise that OCZ, one of the greatest innovators in the DDR memory market has used this very cooling method on their latest Reaper HPC DDR2 modules. 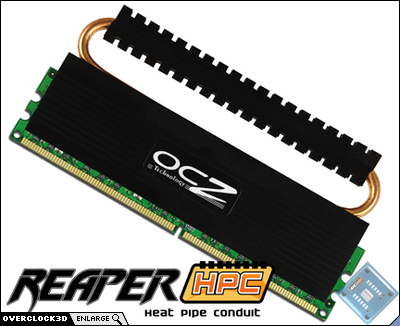 The following information has been taken directly from OCZ's website: 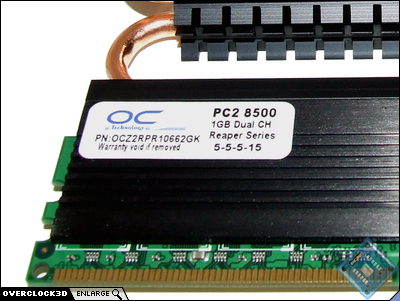 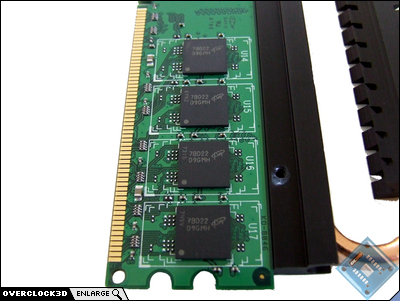 OCZ have always catered for the overclocking community, and it's great to see that there's been no change of ethics in their latest Reaper series. All Reaper modules come complete with a lifetime warranty that covers overclocking and running the modules at up to 2.35v.

Interestingly, the stock voltage (2.3v) for the Reaper kit is a tad higher than most other PC2-8500 kits we've reviewed recently. This could pose problems for people with non-enthusiast motherboards that may be unable to provide this kind of voltage to the memory slots. If you are planning on purchasing a Reaper kit, it would certainly be worth checking in your motherboard manual for available voltage options first.

Overclockers will be delighted to hear that the Reaper modules are based around the highly favorable Micron D9 (D9GMH) IC's. These have performed very well in previous reviews, and I'm sure the heatpipe cooling will help us push them to their limits later on in the review.