Only a short while ago when DDR3 was unleashed upon the public along with Intel's DDR3-supporting P35 chipset, many people were sceptical about any possible performance gains achieved by moving to this new technology. In fact, here at Overclock3D we even performed our own analysis in the Asus P5K vs Asus P5K3 (DDR2 vs DDR3) review and found only a negligible performance improvement in favour of DDR3.

However, in the past couple of months DDR3 technology has been moving forward in leaps and bounds, with enthusiast orientated companies such as OCZ ramping up memory speed and tightening timings like there's no tomorrow. Some of the fastest kits on the market at the moment come in DDR3-1600 and DDR3-1800 formats, with the latter of the two being on the verge of breaking the 2ghz mark - making for some extremely fast read/write performance indeed!

For most of us OCZ needs no introduction. Being one of the innovators in the PC enthusiast market, and with firm beliefs in after-sales service and customer satisfaction, OCZ are pretty much a household name. However, for those of us who have had our heads firmly stuck under a rock for the past 7 years since OCZ's entry into the memory market, here is brief snippet of history taken from their homepage:

Entering the memory market in August 2000, OCZ Technology was built around the determination to manufacture the best high speed DDR and RDRAM. OCZ was founded by enthusiasts, for enthusiasts, and our commitment to the end-user has not digressed. OCZ Technology has been an innovator in many areas. We were the first manufacturer to make Dual Channel optimized memory available to the public, which originally took advantage of nVidia's Twinbank or Dual DDR architecture, found in their nForce chipset. We have now taken that technology and tailored it for the Canterwood, and Granite Bay chipset's. OCZ developed and was the first to implement ULN technology, which has been a critical element in our manufacturing process for some time. We at OCZ diligently work to improve communication with CPU and motherboard chipset manufacturers prior to the release of their products. Only in this manner can we fine-tune our memory's SPD settings, ensuring a synergistic relationship between the memory module, memory controller, and microprocessor. In today’s rapidly evolving semiconductor industry, such communication is not simply research, but a necessary component of our manufacturing process.
Today we'll be taking a look at one of OCZ's high-end DDR3 kits from their Platinum range. So without further ado, let's check out the specs....

OCZ have always been known for furnishing their memory modules with lifetime warranties and generous headroom for pushing memory modules past their stock voltages. The following information has been taken directly from their website, so let's see what they have in store for us this time around:

The new PC3-12800 Platinum Edition was developed to offer enthusiasts a memory solution that takes full advantage of the capabilities of the Intel P35 and X38 Express chipsets. At 1600MHz, the OCZ PC3-12800 Platinum and is rated to run CL7-7-7 to truly take these next generation platforms to new heights.
...
Each module is 100% hand-tested for quality assurance and compatibility and features a proprietary platinum-mirrored XTC (Xtreme Thermal Convection) heatspreader for the most effective heat dissipation. As part of OCZ’s line-up of premium memory, the DDR3 series is backed by a Lifetime Warranty and industry-leading technical support for unparalleled peace of mind. 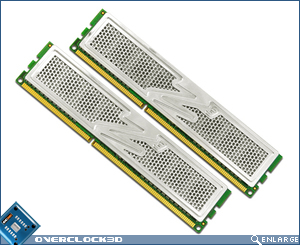 * XTC (Xtreme Thermal Convection) heatspreaders optimize the thermal management of memory modules by promoting greater airflow by means of micro-convection throughout what is usually the dead air space inside conventional heatspreader designs. In this manner, build-up of heat is avoided and thermal dissipation of the memory components is offloaded more efficiently through the honeycomb design. At the same time, mechanical stability is maintained.

**OCZ EVP (Extended Voltage Protection) is a feature that allows performance enthusiasts to use a VDIMM of 1.95V without invalidating their OCZ Lifetime Warranty. 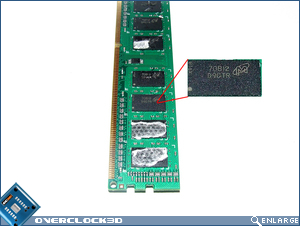 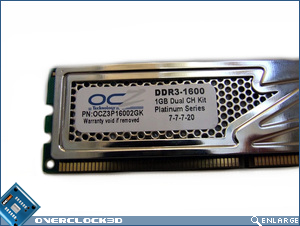 Further to the specifications above, it is worth noting that the SPD on these modules is programmed to JEDEC standard timings of 9-9-9-24 with a frequency of DDR3-1333Mhz at 1.5 volts. In order to run them at OCZ's quoted settings, you will need to manually adjust the settings in your BIOS.

Removing the XTC heatspreaders from the modules reveals a row of eight overclocker friendly Micron D9GTR IC's on one side of the module. Many manufacturers have used the D9GTR IC's in their higher-end PC3-14400 (DDR3-1800) kits, so we should certainly see some decent overclocking results from this Platinum kit.
«Prev 1 2 3 4 5 6 Next»

Now, lets sort out all those spelling mistakes.. hahahah got ya, only joking!!

None the less DDR3 is finally looking up.. but then you look at the price!Quote

PV5150
How good is that RAM? Absolutely insane!!! Once more peeps start adopting it and the price comes down a bit more I'm on it. Great review as usual Jim

JN
Cheers guys. It is indeed some extremely fast ram. Now I'm tempted to crank it up to 2.1v under some water

ionicle
i remember about 3 years ago, i mentioned watercooling ram on the forum, and everybody laughed at me, well, look at this now

I won't get ddr3 until the price of 2gb is half that price!Quote
Reply