Ask any overclocker what the top 3 memory manufacturers are and no doubt OCZ will be in their rundown. OCZ have been manufacturing memory for the overclocking scene for just over 6 years now and have gained a reputation for producing some of the fastest, most reliable memory on the market.

Just the other day I found myself browsing their website, looking at their latest DDR2 line-up, and to my surprise they didn't have anything higher than PC2-8000. I thought to myself "surely OCZ aren't letting it slip - other memory manufacturers are up to PC2-8500 now". However, 2 days later a package from OCZ arrived at the doors of Overclock3D containing some rather sexy looking gold memory. A quick look at the OCZ sticker confirmed that this was indeed PC2-8800, once again showing that the boffins at OCZ had been working hard to break the current speed records and regain their position at the top.

OCZ Gold has always been considered their more mid-range memory, often not overclocking as well as their Platinum or Titanium ranges. With this in mind, let's see what these little bars of gold are capable of...

When it comes to packaging memory, manufacturers like the heatspreaders to do the talking. OCZ are no different, choosing a tried and tested method that puts their modules on full display. 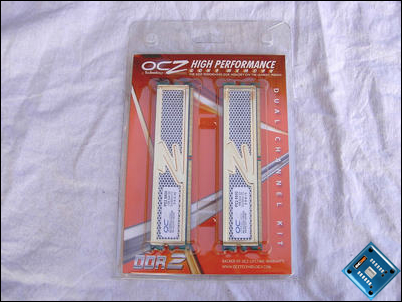 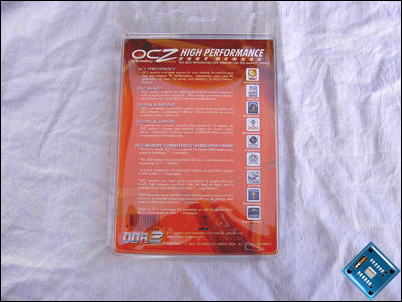 The modules are protected by a hard plastic blister pack style packaging, with a printed card insert at the back sporting the OCZ logo and some basic information about the modules. Printed on the reverse of the card is some excerpts from previous OCZ memory reviews along with information about OCZ's lifetime warranty and technical support details.

Ham
*starts to wonder if XMS does actualy have a job...*

Good to see you hard at it though:P.Quote

JN
Quote:
Yeah i try to keep pointless sleeping to a minimum