With the event of ground-breaking processors such as Intel's Conroe, the need for high quality DDR2 is on the rise. Traditional PC2-5300 and PC2-6400 modules are proving too underpowered to satisfy the modern DDR2 overclocker's needs, as bus speeds of 450mhz+ are becoming easily obtainable.

Today I'll be taking a look at one of Kingston's top-of-the-range HyperX DDR2 kits rated at PC2-8500 (DDR1066 to the rest of us), to see just how it shapes up when pushed to the limits.

Founded in 1987 with a single product offering, Kingston® now offers more than 2,000 memory products that support nearly every device that uses memory, from computers, servers and printers to MP3 players, digital cameras and cell phones. In 2005, the company's sales exceeded $3.0 billion.

With global headquarters in Fountain Valley, California, Kingston employs almost 2,900 people worldwide. Regarded as one of the “Best Companies to Work for in America” by Fortune magazine, Kingston’s tenets of respect, loyalty, flexibility and integrity create an exemplary corporate culture. Kingston believes that investing in its people is essential, and each employee is a vital part of Kingston’s success."

When it comes to memory, most manufacturers like the heatspreaders on the modules do all the advertising. As a result of this it's very rare to see memory that doesn't come in a clear packaging.. 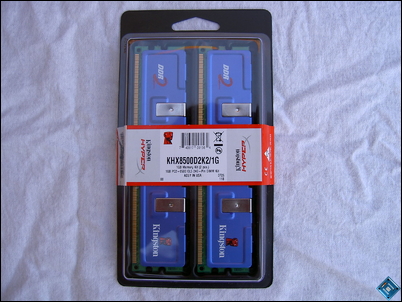 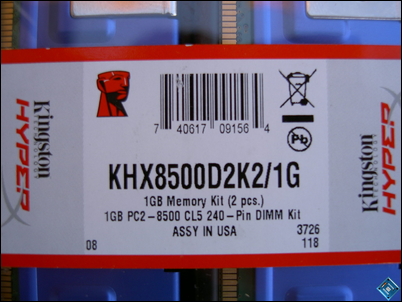 The Kingston HyperX PC2-8500 follows the trend, packaging their memory in a moulded plastic box with clear plastic front. It's good to see that Kingston have gone to the trouble of manufacturing the packaging out of anti-static plastic - a safety feature neglected by many other memory manufacturers.

Bit dear for 1gb tho

Ham
Good god your cranking them out today arn't you.Quote

kimandsally
Hey my mouths watering now, like a kid at Christmas I'm going to be when my 2GB kit arrives, very nice review I'm going to review my kit when it arrives but you'll have to forgive me in advance as it won't be as good as yours I don't have a clue how to do those graphs.Quote
Reply