Packaging
One thing I've always commented on in previous memory reviews from most other manufacturers is the over-use of the clear plastic blister style packaging. Not only does this method of packaging provide very little protection for the modules during shipping, but it also raises concerns regarding ESD damage. As we've seen in previous reviews, Crucial have always put protection before appearance - and it doesn't look like anything has changed with their PC3-16000 kit either. 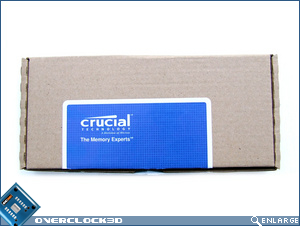 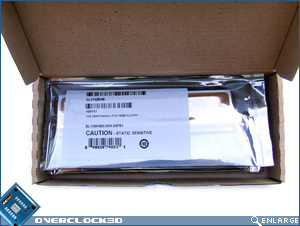 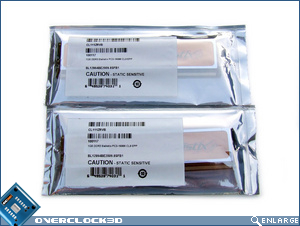 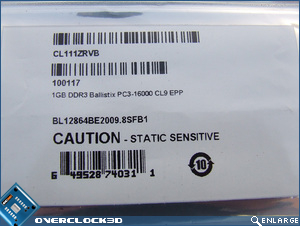 Consisting of a single walled plain cardboard box sealed with a large Crucial sticker, the outer packaging of the Ballistix kit gives no indication as to what modules are contained within. However, on opening the box we can see that Crucial have individually sealed the modules in their own anti-static bags - each complete with their own barcode specification labels.
Appearance
The Ballistix kits have always been instantly recognisable by their trademark Gold painted Aluminium heatspreaders and Black PCB's (with the exception of the "Ballistix Tracer" series). However, many manufacturers change the looks of their modules with almost every new release; testing out new and innovative cooling solutions in the hope that their modules will be separated from the crowd. Have Crucial made any aesthetic changes to mark the release of their DDR3-2000 kit? Let's have a look... 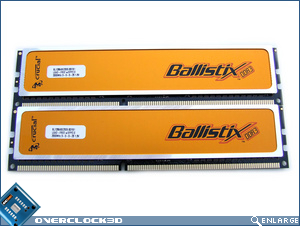 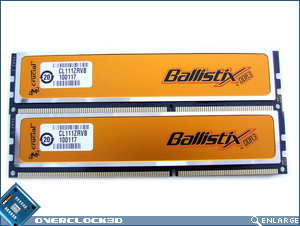 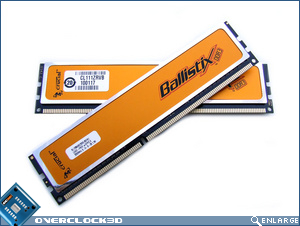 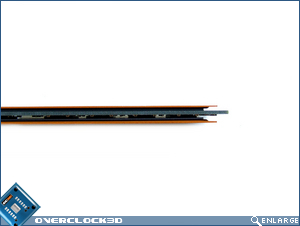 The Ballistix PC3-16000 kit uses exact same heatspreaders as the recently reviewed PC3-12800 kit and a very similar design to some of the Ballistix DDR2 kits we reviewed last year. Obviously this isn't a bad thing, as Crucial Ballistix memory modules will continue to be among the most easily recognisable in the industry, but it doesn't really give us anything new to talk about. 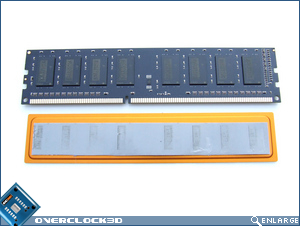 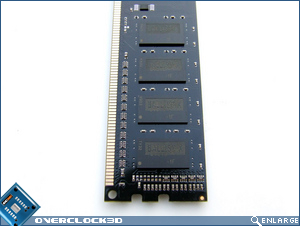 Removal of the heatspreaders certainly isn't for the faint of heart and actually required the use of a blowtorch to heat the adhesive thermal pads up to a point where they could be removed without pulling the memory IC's off with them. As mentioned previously, Crucial have decided to print over the Micron logo and IC serial numbers with a large Ballistix logo. Normally this would prevented us from obtaining a definite identification of the IC's modules, but due to a mis-alignment of the Ballistix stamp on one of the chips, we were just about able to make out a D9GTS marking.
«Prev 1 2 3 4 Next»

I get the whole argument about timings vs mhz but what is odd is that in the Everest Memory Latency tests with 9-9-9-28, the overclocked settings lost by quite a bit even with the same timings. That overclock seemed to bugger them up quite a bit.

Rastalovich
What bites me atm is 4x1g of this is looking at £600 with some possible playing around with volt/timings to accomodate a non set.

(figures are up in the air, but there`s a point to be had)Quote

JN
Quote:
Tell me about it :s For a lot of it you can put it down to certain benches liking the higher OC of the CPU or the lower memory timings, but the DDR3-2144 results are just wierd and something that ASUS are actually trying to reproduce at the moment.Quote

Hassan
These are one nice looking beasts

Can I have 'em - pretty please