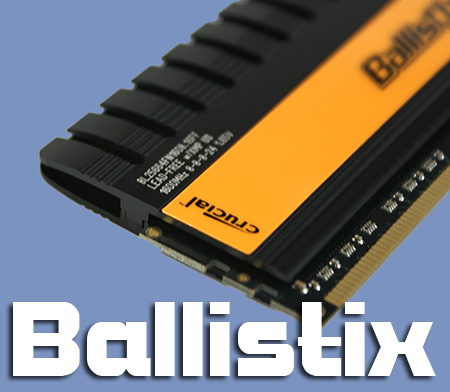 In any field someone always has to be the fore-runner. The bow that breaks the waves to allow everyone else to follow in the wake. More often than not that very fore-runner is quickly overtaken by everyone else as they refine and improve the process.

Sadly todays Crucial Ballistix review is very much that bow. It is a RAM Kit that will add to the JEDEC standard that has made all our lives easier, allowing us to plug our RAM in, secure in the knowledge that the timings will be picked up quickly by the motherboard. The voltages will be set accurately. The finicky nature of RAM, which is the cause of more PC problems and faults than all the other components put together, has lessened greatly over the years. We're a long way from the days of there being one or two sticks of RAM that are compatible with our board. Now we can plug nearly anything in and be sure that it will, at the very least, work.

By the introduction of the temperature sensor and the philanthropy shown by Crucial in keeping it royalty free and open source will allow future monitoring programs to become ever more accurate and we can rest much easier knowing we aren't frying our chips in the hope of gaining a few extra MHz.

However, we also have to look at the realities of what we are presented. We can't review on theoreticals. There aren't any awards for doing a good deed. The plain fact of the matter is that this kit isn't very good.

Poor performance can be excused on two grounds.

Firstly that something is hugely overclockable. This Ballistix kit is already at the stops with 1.65v and so, unlike the Kingston, we haven't got some voltage headroom. Even then there we've tested many sets that will run much higher than their rated speed without needing a power boost.

Secondly it can be excused if something is staggeringly cheap. As yet pricing is unavailable but it doesn't matter what you put it up against. Unless it's coming out at about £50, which we all know wont happen, there are countless far better options. Even at stock speeds it was beaten by an identically rated kit and we could have picked from plenty and confidently say they'd all have outperformed the Crucial.

As a proof of concept it's fine. As a demonstration of Crucials addition to a world-wide standard it's good. As a kit you actually want to go out and buy it's not even going to be on the long-list, much less the shortlist.

Thanks to Crucial for todays review. Discuss in our forums.

silenthill
The On-board I2C temperature sensor is really a cool feature and now we will be able to know when our RAM is cooking, wonder if HWMonitor utility will detect it too.Quote

tinytomlogan
Quote:
HWmonitor didnt with the latest version available. I have heard corsair have sneaked out a lot of ram with thermal probes built in.Quote

silenthill
Quote:
Ive seen a video which demonstrate Corsair memory with LEDS so when the memory heats up the LED indicators light up, It didnt appeal to me because when the case door is closed and you dont have a windowed case it will be of no help at all but Tom if you have information that Corsair are manufacturing some models with probes then that is defiantly a step forward.Quote

I Hunta x
If your the kind of person that builds for looks and not all out raw power/the best bang for buck these wouldnt be a bad kit kit at all, one of the few i can recall recently with black pcb's little details like that can mean alot to some people who would be happy not to overclock it and get a few % lower performance for that well finished look. IMO aslong as it is priced around the same as equivilent stock speeded kits its not to bad at all.Quote