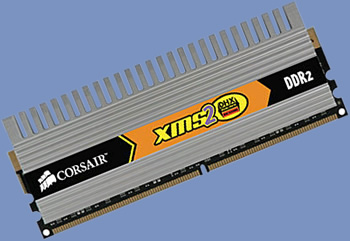 With the current pace of hardware development it is all too easy to let the mainstream, affordable tech fall by the wayside. The DDR2 module is still the mainstay of the enthusiast memory market and has recently been overshadowed by DDR3. Today, however, we are taking a look at a 4GB kit of Corsair XMS2 PC2-6400 sporting the patented DHX heat spreader technology.
Up until recently, with the launch of memory hungry Windows Vista, quantities of memory in the range of 4GB and above would have been deemed excessive in a desktop computer - regardless of how many demanding games you could throw at it. In past months however, with the release of several ground breaking games and increasing popularity of Vista 64-bit, 4GB has become somewhat of a necessity for the hardcore gamer.
The specifications for the memory modules we are looking at today are as follows:
Sporting Corsair’s signature fin memory heat sink and patented heat-removing printed circuit board design, the new XMS2 DHX products feature mainstream performance while promoting increased stability. DHX technology allows this memory to have superior thermal characteristics to enable it to run cooler than a module with stamped or mesh heat spreaders. The result is enabled superior reliability, stability and performance capability.. It has been tested extensively in multiple DDR2 motherboards to ensure compatibility and performance at its rated speed.
Part Number: TWIN2X4096-6400C4DHX
Speed:  PC2-6400 (800mhz)
Size: 4GB (2 x 2GB)
Latency: 4-4-4-12
Pins: 240
So on the face of things, there is nothing revolutionary about what the memory is offering. The patented DHX technology however certainly has promise, the system aims to provide a direct metal to metal contact between the inner plates of the heat sink and the tracks on the modules PCB. Studies carried out show substantial amounts of the heat generated by IC's is still conducted into the PCB, meaning the DHX system is currently the only solution on the market to this problem. Hopefully this technology will stand the memory in good stead when it comes to pushing up the Mhz.
As with all of Corsairs RAM, the XMS2 DHX kit is covered by an extremely reassuring life time warranty providing the memory was purchased through Corsair or one of their many authorized retailers. Further details on Corsairs warranty policy can be viewed here.
«Prev 1 2 3 4 5 6 7 8 Next»

llwyd
Quote:
You got hair on your peaches or what? clock those suckers :stickpoke

Rastalovich
hehe ya, I`m kinda in a safemode atm after my previous memory crapped it.

shame (Afaik) that there's no amd motherboards that take DDR3 yet, i believe the best still only take DDR2

i read the whole review, first to last word, and still thought it was DDR3