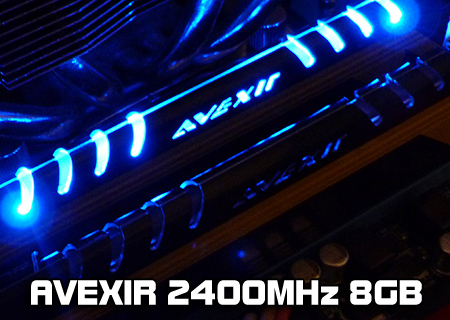 The memory market is, after CPUs, possibly the hardest market to break into. Anyone who has owned a PC from a few generations ago will know that the brand of memory you chose had a large bearing upon the stability of your system. Compatibility between motherboards and RAM was vital, to the point that companies released lists of which particular motherboards worked best with each type of memory.

Thankfully with the recent Intel chipsets these compatibility is far less of an issue, and although some memory still has a list of those motherboards it works best with, by and large you can put anything in anything and be sure that it will work at its rated timings and speed.

Today we're taking a look at a memory kit from a new brand to OC3D, Avexir. Formed in 2006 they blend good performance memory with reasonable pricing. This kit is designed to work best with the MSI Z77 MPOWER motherboard, hence the designation.

8GB of 2400MHz, CAS10 RAM covers all of the bases straight away. A decent capacity, excellent speed, and reasonable timings. As you can see from the image at the top of the page, speed and capacity aren't the only tricks the Avexir has up its sleeve.

Excalabur50
Very interesting would look great with subtle blue accented gear and what bang for buck let just hope it stands the test of time.Quote

The blue LEDs are just a little too light - though I'm sure that wouldn't be too hard to amend with a bit of masking.Quote

Mgutierrez33
That's so funny, I was just looking at the Avexir memory kits last night and wondering just how good they were. They also make the LED effect in red, green, white, orange, and yellow, and have interchangeable heatspreader designs that you can order for them (the red version of the MPOWER design they showcase here, and a plain gunmetal black version). Should you choose to do so you can individually select all of these items to customize the memory yourself through their website... they even go so far as to allow you to customize what the PART NUMBER reads in something like CPU-Z, and you can get something etched onto the heat spreader.

I would imagine that this all costs a pretty penny however, as this is all done DIRECT through Avexir and shipped DIRECT from Avexir... WERTH IT!

Master&Puppet
Was looking at a set of these for my test rig a little while back. Glad to see they reviewed well