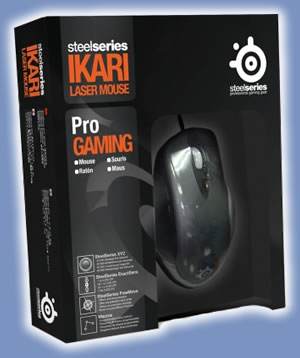 Mice, mice, mice. Our friendly electronic rodent. There's plenty to choose from and even within the high performance niche segment there is a dozen from Logitech and Razer alone. It's a crowded market alright, but does it stop other brands from wanting a slice of the action as well? We think not as just when one thought that there's more than enough mice to choose from, gaming brand SteelSeries appears with some interesting offerings and today, we'll be putting one of them to the test. The SteelSeries Ikari Laser Mouse.
SteelSeries is a well known brand, offering a wide range of products from headsets, to keyboards and mice. With offices around the world and a large fan base, they know a thing or two about the markets they operate in and what the user wants.
"SteelSeries is all about gaming. Our mission is to create performance enhancing gaming gear, created for and by leading professional gamers. We continuously strive to better ourselves, and work with leading professional gamers from 3 different continents to create our products.

The SteelSeries headquarters are located in Europe (Copenhagen, Denmark), and host the primary office facilities for the company. The headquarters handle all planning, production and partner coordination.

For logistical reasons we also have sales offices in Asia (Taipei, Taiwan) and USA (Los Angeles, California). From Taipei we can reach the entire Asian market, as well as New Zealand and Australia. From Los Angeles we can reach North America, Canada and South America. All manufacturing is done by sub-suppliers from Europe and Asia, and then delivered to one of our warehouses for final processing."
Let's have a look at the tech specs.
Specifications
For a mouse priced in at around £45, it's placed at the same price point as the previously tested Roccat Kone, Logitech G9 and Razer Lachesis mice and it's specifications are also very similar too.
- Programmable macro buttons with driverless plug-and-play feature
– 40.000 samples per second (SPS) for unbeatable tracking
– 1 - 3.200 CPI (changeable in increments of one)
– Built in LCD display to help set CPI values on-the-fly
– 500Hz polling rate
– Chassis material and shape based on input from professional gamers
Now let's move on to the next page to see if it looks anywhere near as good...
«Prev 1 2 3 4 Next»

zak4994
It looks really really cheap in terms of build quality. But the review says different.Quote

JN
It actually reminds me of the Microsoft Intellimouse Explorer 3.0 a little bit. Now that was an AWESOME mouse.Quote

Rastalovich
Sweet review, seems a bit pricey, but then there are gaming keyboards for £100 at times. Perhaps this is what they feel they can get away with also.

Looks like it's designed for an evil left-handed person ?

Mul.
Quote:
I think it's bland looks are what makes it appear cheap. The build quality isn't bad at all if I may say so!


Quote:
I thought so at first but it fits in the right hand very well. The right hand side which has been moulded to plant down the third and fourth finger seems to make it look like a lefty mouse.Quote

Skiddywinks
I'd buy one on payday if it wasn't for the price. The fact of the matter is that it is less impressive when compared to the competition, both specs-wise and looks-wise, so why is it the same price?Quote
Reply