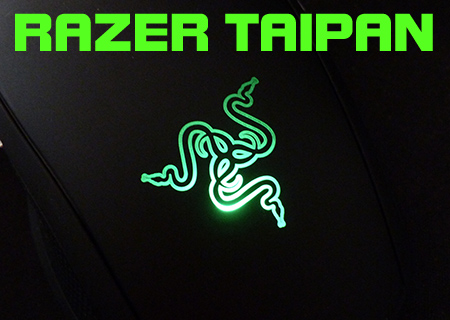 Blimey this sensor is insane. Normally we start working our way through the starter before hitting the main course, but trust us, when you have finished your first day with the Taipan it's tough to think of anything other than how blazingly responsive it is. It is like finding a ghost chilli in your apple pie. One moment you're weighing up the comfort and suchlike, and the next your eyes are out on stalks as your brain struggles to process all the information coming it at once.

But, for a moment, let us return to the entrées.

The packaging is standard Razer fare. A nicely designed box that wouldn't survive too many LAN events, surrounding a retina burning green cradle in which the Taipan sits. Round the back is the documentation, all well written and crisply designed. The software requires a download, which is something we expect, such is the fast changing world of software development. You always want the latest version and, like drivers with GPUs, nobody would ever install the included one so it makes sense to leave it out the box entirely.

Speaking of the software, it's a huge amount of great, mixed with a tiny flaw. Starting with that flaw, we'd much prefer at least giving us the option if we want the cloud settings storage, rather than yet another username and password for yet another site before we can even get to the good stuff. We understand that LAN gaming is the focal point for all peripherals, in the same way that a fast Nurburgring time is the focus for a fast car, but in the same way that most cars are used going to the shops, so most peripherals go no further than your desk at home. Having the option not to keep your settings on Razer's servers would save us all bandwidth, time, effort and the like. However, once you get past that little hurdle it's a breeze to use. We've lost count of the amount of times a confusing icon has been used when text would be clearer, and nobody likes spending their life waiting for a tooltip to appear, so kudos to Razer for making the UI as uncomplicated and clear as is possible. Everything is where you want, and does what you want.

The Taipan itself is surprisingly comfortable for such a small mouse. If you're a palm player, or blessed with the kind of hands that can play a keyboard octave, then it will probably be a bit on the small side for you. It's not laptop mouse small by any means, but neither is it akin to a Kone+ or Mionix NAOS in the heft stakes. The coating is hard and, to be honest, not that nice to feel, but feel isn't the point of it. This is about grip and control, and the Taipan has that in spades. You could be playing the CS world final in the Amazon Rain Forest and still it wouldn't slip out from your grasp.

But that sensor. Wow. We've seen a couple of quicker ones in pure dpi terms, but the smoothness and the responsiveness are almost unparalleled. Here at OC3D we're heavy gamers and, although we're not pros, we found the sensor right on the edge of our capabilities to keep under control. It's so good it's nearly better than we are. Sure you can turn it down, and doing so loses none of its sharpness, but you wouldn't buy a 100W Marshall Amplifier and put your headphones in it, and buying the Taipan is all about challenging your capabilities and extracting the maximum performance you're capable of.

So with the only downsides being that the lighting is green or green, and that if you're particularly large of hand you need to use a fingertip style, then the Taipan is easily an OC3D Gold Award winning mouse and, dare we say it, a match for the epic Steelseries Sensei.

Thanks to Razer for supplying the Taipan for review. Discuss your thoughts in the OC3D Forums.

SieB
The design is quite similar to the soon to be released Razer Ouroboros. The Taipan looks like a good mouse but I think i'm going to go with the Ouroboros for the wireless and the customization. The Taipan is a good second choice though if reviews for the Ouroboros turn out to be bad.Quote

. It definitely looks different to the usual Razer style, but it's good to see it's catered for both left and right handed users

. I would have liked to have seen an option to change the colour of the light, but oh well, still a very, very nice product from Razer.Quote

PetrolHead247
Even though i'm by no means a Razer fan this mouse does look hugely epic. Only problem for me would be the green lighting, would look way out of place next to my K90, but still it looks like an awesome mouseQuote

AverageNinja
If they make a white version of this, I shall buy it.Quote
Reply