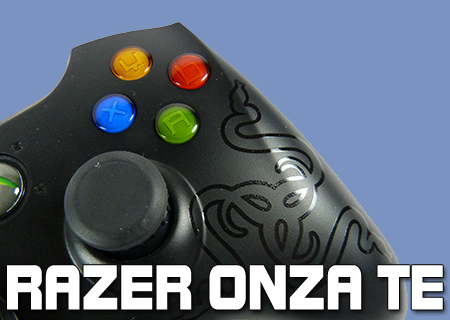 There has been a definite shift in PC gaming in recent times. For a while a PC game couldn't hold its head up if it didn't require some esoteric piece of equipment to play, have a keyboard overlay, and plenty of time in the library spent studying the manual.

Now with the XBOX 360 being a PC in a box, developers have left more and more of their titles on the system that developed them. Indeed with the easy plug-and-play nature of a wired 360 pad many games come complete with a 360 config so you can be up and running in moments. So whilst the console roots of titles mean that graphically games are lagging behind, in the playability stakes there has never been a better time to be a PC gamer.

Razer have been around forever providing us with many of the finest mice around and they have now turned their attention to the XBOX 360 pad and turned the volume up to 11.

There is a lot to take in when looking at what has changed in the Onza TE when compared to a stock XBOX 360 pad. Extra buttons, plenty of adjustments and a really gorgeous look.

Speaking of gorgeous looks, read on.

dugdiamond
i do like razer, and the addition of mappable joy-buttons is great, but that d-pad is fuglyQuote

Lollipop
Is there a wireless version?Quote

yassarikhan786
I would love me a wireless version

SieB
Looks tacky to me and they could have at least tried to make it not look almost exactly the same as a 360 pad. Personally I thing the Dualshock 3 pads are the best plus you can get them for around £25.