We've looked at a couple of Logitech keyboards recently. Firstly we had the G810 Orion - the cut-down version of this keyboard and one that we felt provided a classy take on the Gaming Keyboard - and the G213 Prodigy, which is very much a simple RGB keyboard masquerading as a more expensive offering.

Today we're reviewing the model that defines the Logitech range of keyboards. Ask almost anyone what they consider to be the traits most associated with Logitech and you can be pretty sure that they'll mentioned extra gaming features or especially the screen that came to dominate the public perception of what makes a Logitech product.

As we all own smart devices in some capacity or another the need for a second screen built into the keyboard has passed, and some way of utilising your smartphone as the second screen is the way forwards. Enter the G910 Orion Spectrum, a keyboard which combines full RGB lighting, plentiful extra macro keys, and a very cool way of combining your phone into proceedings. Let's take a look.

The G910 uses the Romer-G switches rather than Cherry MX options. We have reviewed these previously and found that they have a much shorter actuation distance than the Cherry MX and a lighter actuation pressure too. Perfect if you want instant response whilst still having the robustness of a mechanical switch. 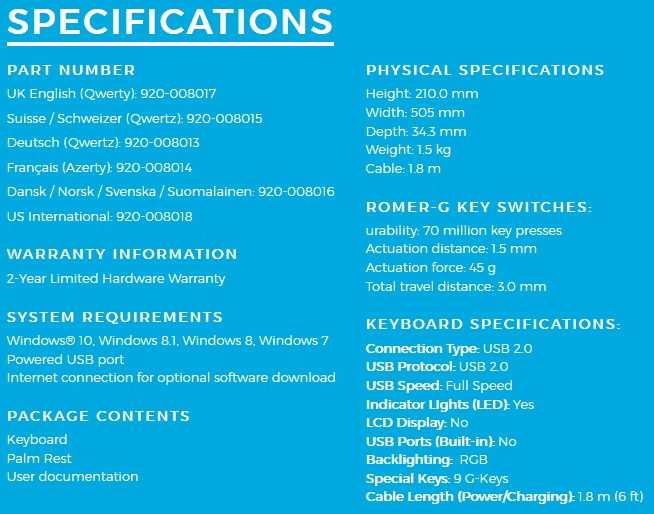