One of the universal shared experiences to which we can all relate, whether we admit it publicly or not, is that of being in the midst of a task requiring heavy concentration and reaching for our drink, only to clatter it and end up with a desk covered in way more liquid than one would have imagined could fit in that container. As someone who would be in an encyclopedia as a definition of a 3am loner gamer with major caffeine issues I've got a coffee cup that fits about a pint of coffee, but when it's knocked over I reckon you could irrigate the Sahara with the amount of liquid that appears.

But whether you've ruined a favourite keyboard by unexpectedly dousing it in a sugary beverage, or if you've very nearly done so but saved it at the last moment, you'll appreciate the Corsair K68 and it's spill proof design. With internal channels to move what little liquid makes it through the silicone covering away from the vital components and spaces on the underside for that liquid to quickly be expelled it is a boon to those whose hands seem magnetically attracted to the side of their cup/can. The fact that this feature also comes as part of another addition to the famous Corsair line of RGB mechanical keyboards is the cherry on top.

Let's put it to the test.

The K68 combines all the hallmarks of a modern mechanical gaming keyboard. We have Cherry MX switches, the low actuation red variant, full RGB lighting on a per key basis, full key rollover (perfect for fighting or FPS games) which registers every key press even if you've banged your head on it in frustration. What should pique your interest is the IP32 spill resistance.

The IP32 rating protects against - and we quote "Vertically dripping water shall have no harmful effect when the enclosure is tilted at an angle up to 15° from its normal position.". So given that keyboards are always flat, you should be okay when you accidentally catch your can/cup. 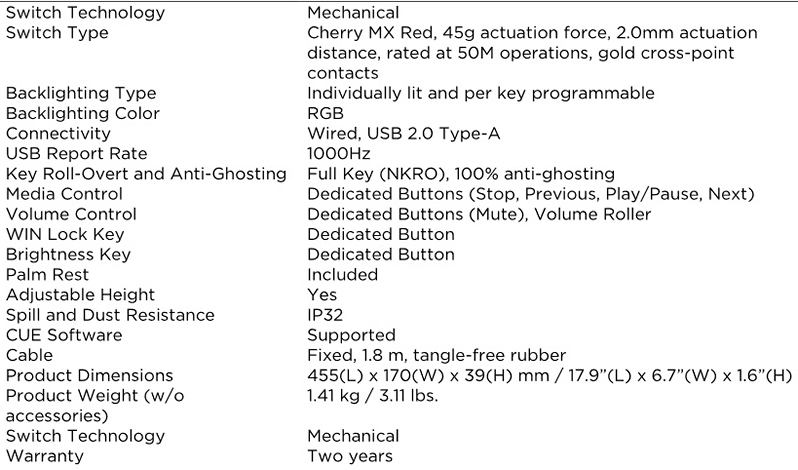 gunbust3r
Only thing I wish Corsair would do is improve the search for new lighting/profiles. They give you the sort options of total downloads and total likes, both basically amount to "profiles that have been on here a long time"Quote

ByteMyAscii
"keyboards always flat".
No, I given an opportunity always have the back edge raised up on the feet.
And even on my current one with a broken rear foot it has an angle by default.
If anything I would rather have it sloped when it comes to liquid, as that will get it off the surface quicker than it sitting there longer when flat.Quote
Reply