With all of the recent high end releases it is easy to forget about mid range hardware, while we love looking at epic pieces of hardware like the ZOTAC GTX 980Ti Arctic Storm we have to keep in mind that such GPUs are overkill for the needs of many PC Gamers and is simply at a price that most people cannot afford.

Today we are having a look at ZOTAC GTX 960 AMP edition, a factory overclocked version of Nvidia's GTX 960, which includes a stealthy looking dual fan cooler and includes a full cover backplate. 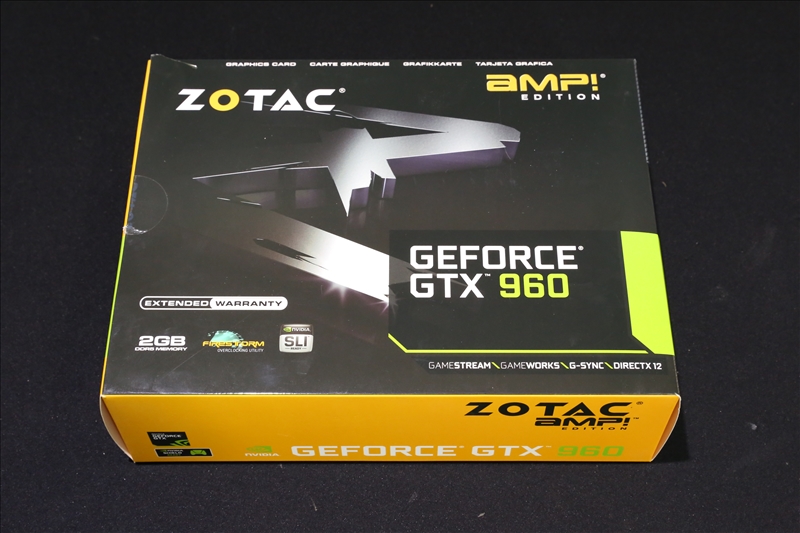 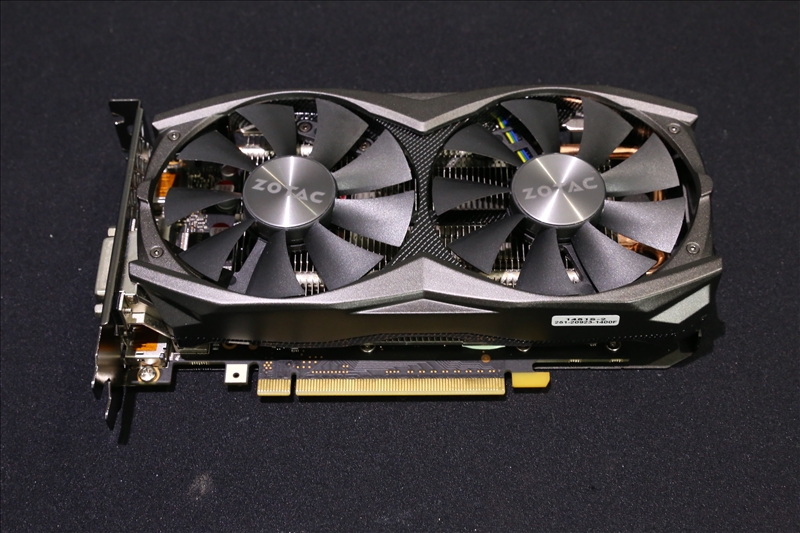 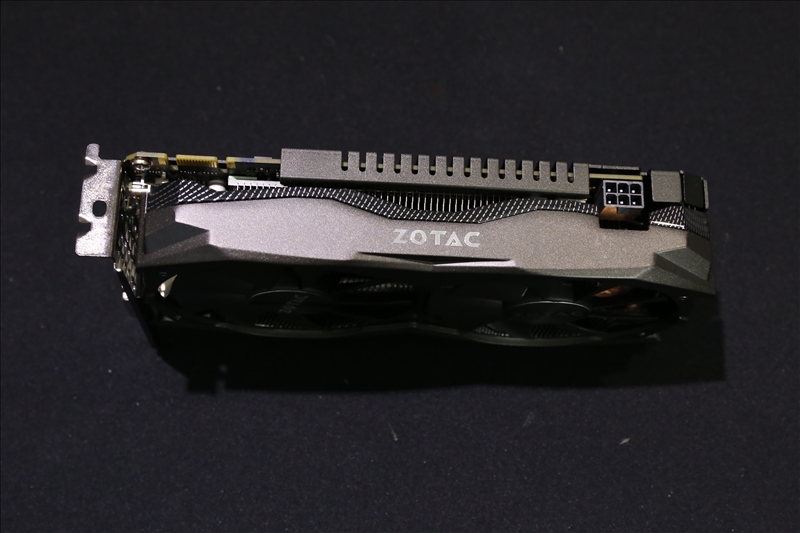 The ZOTAC GTX 960 AMP is an Nvidia Maxwell GPU, offering excellent performance per watt and allowing the cooler to easily keep this GPU at low temperatures. The GPU is powered by a single 6-pin power connector and operates silently at idle with ZOTAC's Freeze technology, which turns off the GPUs fans at low temperatures and loads.

One thing to not here is that the RAM on this GPU is in direct contact with the GPU cooler, which is rare for a GPU of this price. This will allow you memory to run cooler and perhaps allow you to get a little bit more out of it when overclocking.

The GPU runs with a factory overclock of 1266MHz base and 1329MHz boost, which is much higher than Nvidia's reference clocks of 1127MHz Base and 1178MHz boost, making this one of the fastest stock GTX 960 GPUs available. This GPU has 2GB of VRAM, which ideal for most gamers at 1080p.

The only problem with this GPU visually speaking is that the ZOTAC lettering on the back plate is upside down, so when you look at the GPU through a PC's window you will not see it in the correct orientation. 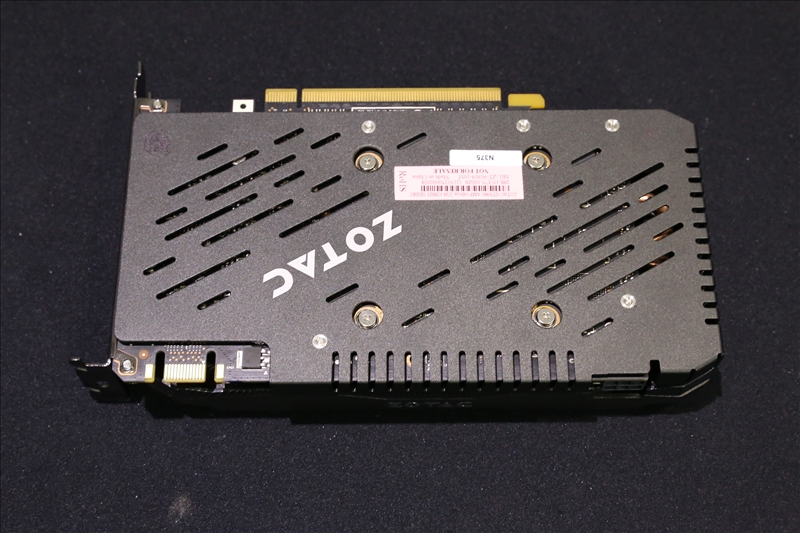 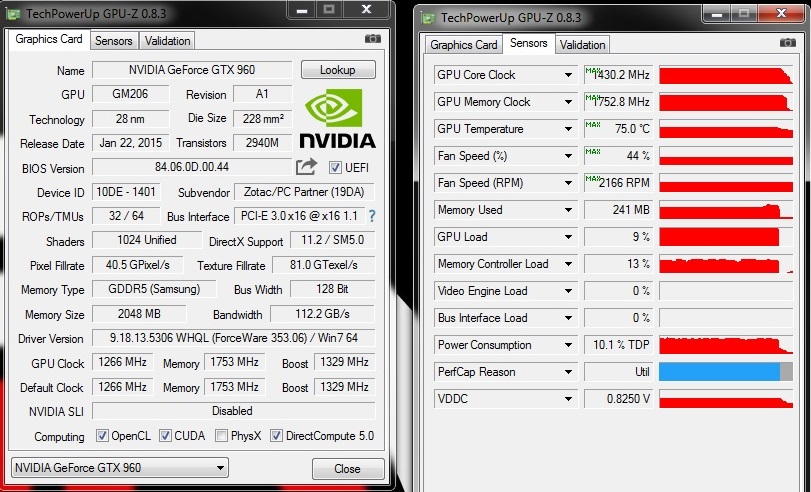 When it comes to thermals and noise ZOTAC's GTX 960 AMP offers a great balance between cool and silent operation. After running it through Unigine Valley for over 30 minutes we were unable toe get the GPU to run at over 75 degrees Celsius. During this test we were also able to see this GPUs natural boost frequency, which is 1430MHz, over 100MHz above the GPUs stated boost frequency.

During this test the card remained almost inaudible, running it's fans at a mere 44% capacity. At idle the fans quickly returned to ZOTAC's "Freeze" mode, were the GPU fans stopped spinning entirely, making any existing GPU noise simply fade into the background. 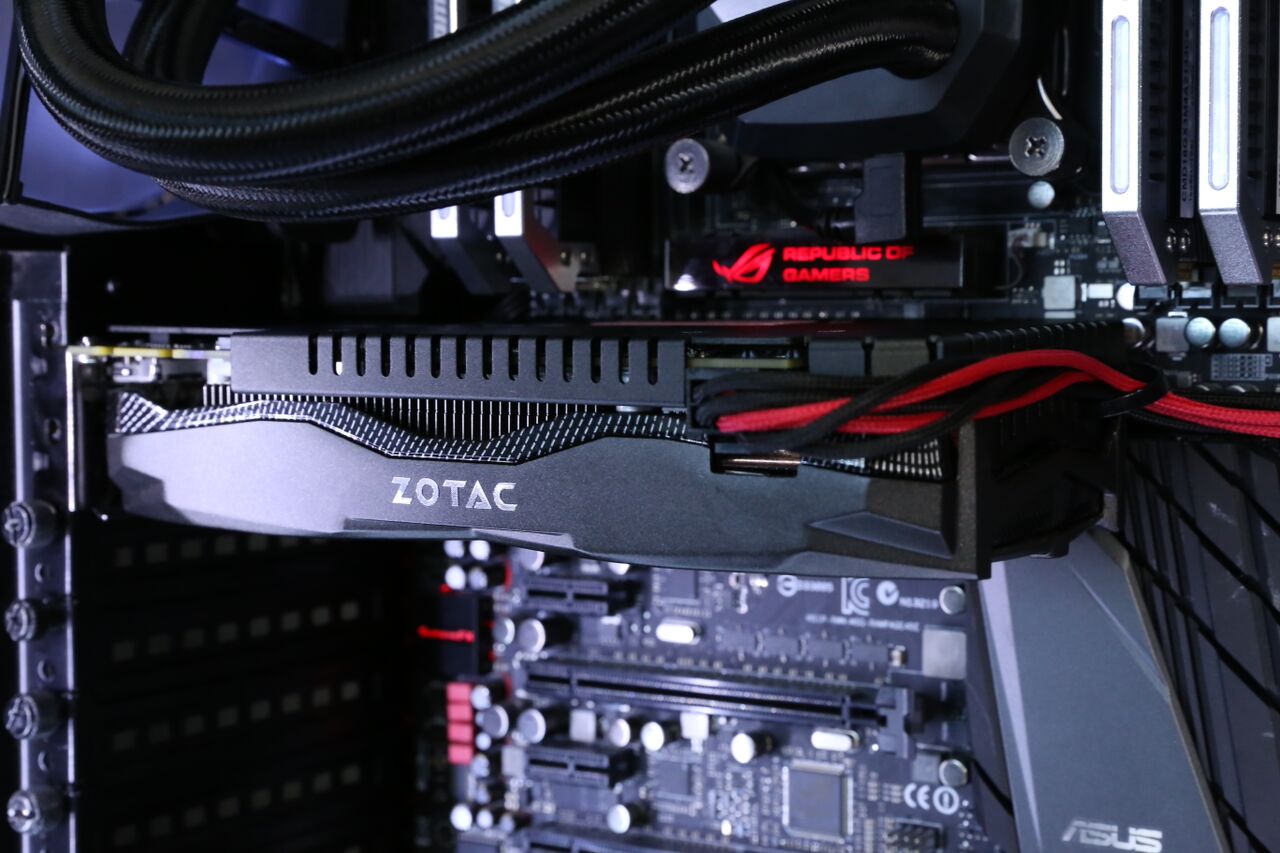 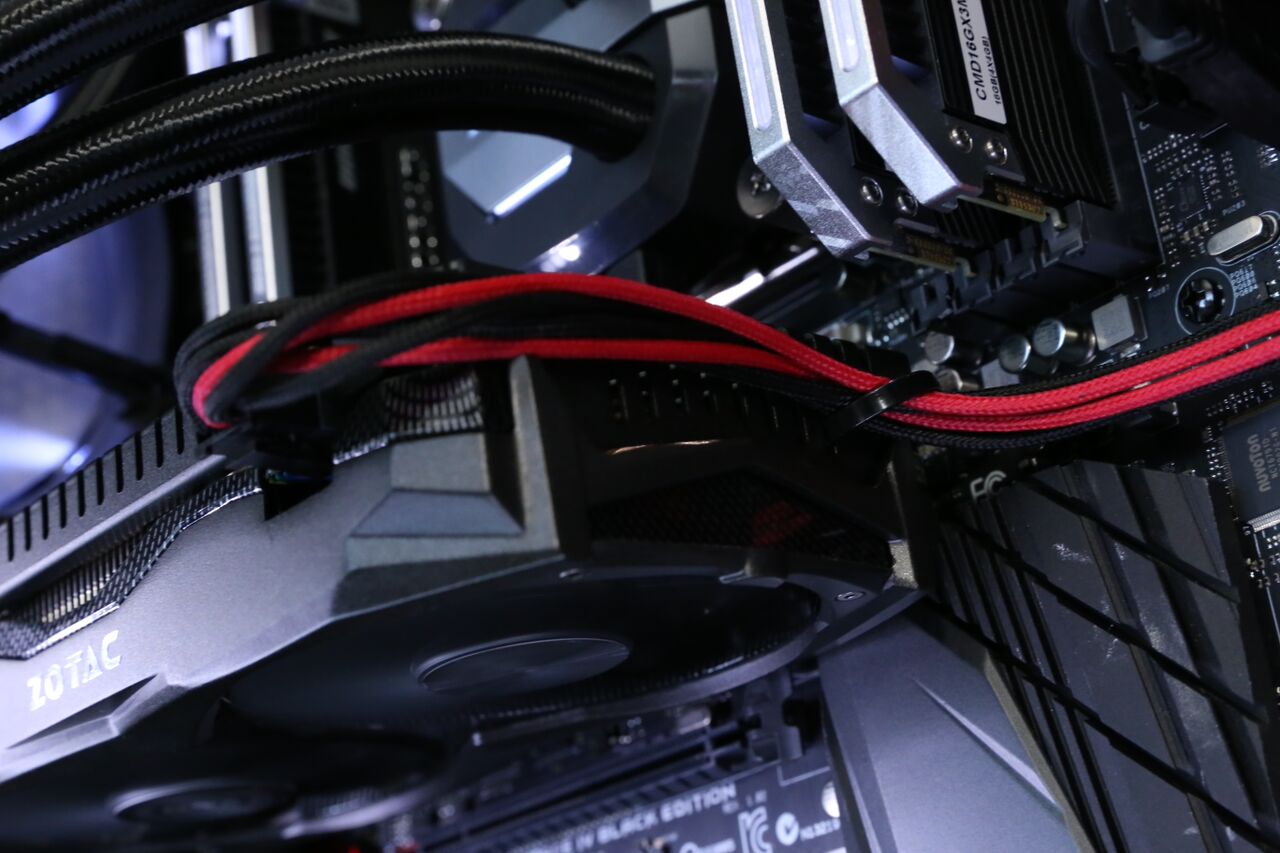 One neat little trick that we have found with this GPU is that you could use the slit in the back of it's backplate to help manage your GPU's 6-pin power cable. This will be particularly usefull to all of you Mini ITX builders out there, as you will be able to keep your GPU cable right against the edge of your motherboard.

ZOTAC's GTX 960 AMP is an ideal GPU for 1080p gaming, with a nice factory overclock of over 100MHz on both the cards base and boost clock speeds, a cool running dual fan design and a nice stealthy aesthetic, this GPU is certainly a GPU to consider for a mid range build.

With it's all black aesthetic on it's dual fan cooler and a full cover backplate this GPU will easily make itself home on any PC build, while keeping this GPU operating at low temperatures. This GPU is a ZOTAC AMP GPU, which means that it is designed to be overclocked, so you should expect to get a nice boost from it's already good factory overclock if you want to take it's performance one step further, though you must bear in mind that the silicon lottery still applies.

The only problem that we can see with this GPU is a very minor one, that the ZOTAC lettering on the GPU's backplate is upside down. This is a purely aesthetic problem, so those who either do not care for aesthetics of  do not use a Windowed case can safely ignore this.

ZOTAC say that their GTX 960 AMP Edition is the solution for enthusiasts who want performance, function, and style from a mid range GPU, which we certainly believe when looking at this GPU.

You can join the discussion on the ZOTAC GTX 960 AMP on the OC3D Forums.

Wraith
Low power draw and that cheeky sexy black with a hint of carbon, what's not to like and also nice to see the prices coming down slightly. Would be great paired for some SLI goodness and at that price it's not a bank buster.Quote

Greenback
I do like how they enclosed the pcb in the back plate, 2 cards posted in 1 day both in my price range and both not redQuote