FarCry 2 is based upon the Dunai engine developed by Ubisoft and takes advantage of multi-core processors along with support for the DirectX 9 and DirectX 10 API. Running the Far Cry 2 benchmark tool the test was run 5 times with the highest and lowest scores being omitted and the average calculated from the remaining 3. 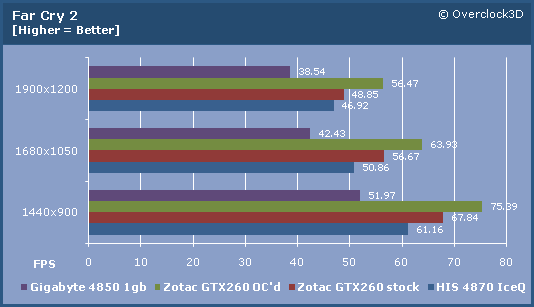 Unreal Tournament 3 the latest game in the long running Unreal series from Epic Games and Midway. The game uses the latest UE3, which combines fast gameplay along with high quality textures and lighting effects. All benchmarks were performed using UTbench with a fly-by of the DM-BioHazard map. As usual, all benchmarks were performed 5 times, with the highest and lowest results being removed and an average calculated from the remaining three. 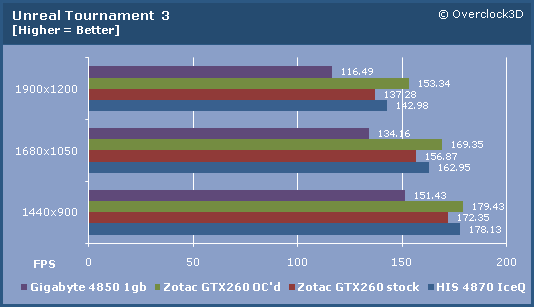 Race Driver: Grid is a visually taxing game that presents a challenge to any graphics system. Results were recorded using FRAPS to log the average FPS over a 2 minute race. To ensure consistency, the same track, car and general path of travel was used in each of the 5 benchmark runs for each graphics card, with an average FPS being calculated from the median three results. 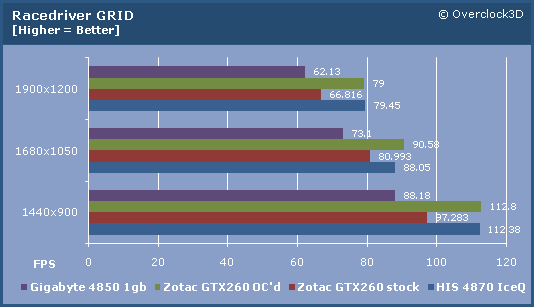 The ATI cards take a bit of a pounding in Far Cry 2. However, they respond well in Unreal Tournament 3 with the 4870 pretty much matching the overclocked GTX260.  As we move onto GRID it becomes a two horse race. Both the pre-overclocked HIS 4870 and OC'd GTX260 get almost identical framerates, with the GTX260 taking it by the smallest margin. The 4850 as usual, was close, but not close enough.

Any particular reason for the exclusion of cost-per-frame?Quote

Luigi
Quote:
Its not been done on a few of the recent articles.. It works best with cards which are far apart in cost, so you can compare them on a even playing field, but since these cards are so close it would take up a lot of graph space for not a lot of useful information..

If there are any in particular you would like to know I can rustle up a graph.Quote

monkey7
I think this is exactly where the cost per frame comes into play. The choice between a midrange and highend card based on price isn't hard anyway, but here it's starting to be tough.

Luigi
Quote:
Thanks dude.. what im trying to say is, the cards are ££ apart, people looking to buy 2 cards of that price point, aren't going to be put off by one costing £1.50 more or something silly, it will be solely down to performance.Quote

monkey7
You've got a point there