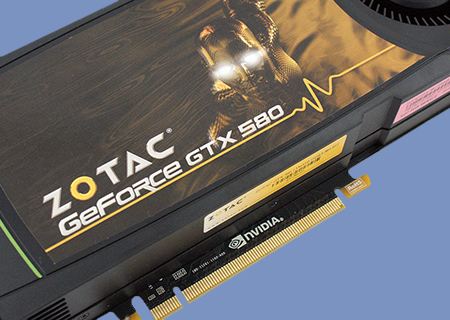 We waited and waited. Eventually after somewhat of a delay nVidia launched their Fermi range of cards to much excitement from all of us. Or at least it was excitement until we realised that they had been reduced in performance in a vain attempt to get them to remain remotely cool, but even then they were woefully noisy and hot. A pair of GTX480s in SLI gave out a similar amount of heat to an exploding star, and about the same noise.

nVidia secretly went back to their labs and greatly revised the Fermi 100, and here it is. Much sooner than any of us expected we have the GTX580. This comes hot on the heels of the recently released AMD 6-series cards and so undercuts AMDs own high-end graphics package, the HD6990. As this is the first time for a while that nVidia have hit the market before the equal AMD card we can't wait to see how the gauntlet has been thrown down.

nVidia claim this is everything the GTX480 should have been, with all the hardware tricks and tweaks turned on and a greatly revised cooling solution. They go so far as to call it the best graphics card on the market. Of course claims and reality don't always meet.

Let's have a look at the specifications and see if this is a revolution or purely an evolution.

So what are the main points? Firstly nVidia have finally unlocked all the shaders so the card is operating at full power. The GTX480 had them cut from 512 back to 480, but here they're all available for our use.

Despite this nVidia have also given the core speed a kick up the behind and greatly increased the speed across the board which has the obvious benefits everywhere.

Slightly less obvious are some under-the-hood tricks employed to also reduce the load, and therefore heat, of the card whilst dedicating more time to producing high frame-rates. This is largely due to an improved algorithm that determines what is visible and what is hidden, and so the card spends less time rendering polygons that will be hidden on the z-axis. The other major change is the ability of the GF110 to filter a texture per clock cycle. This will have the most visible frame-rate benefits in games that use a lot of texture filtering such as the high-dynamic range option in the popular Bethesda range of RPGs.

So with that said, here are the specifications.

And The best Review Video's on you tube Tom

Another Top notch job to both of you Lads !

Rastalovich
Be interested in what you thought of the drivers. What we've picked up was that it seemed as if just the identifiers were in the 262.xx, and that 263.xx atleast should have some 5xx 'special stuff' in them.

The oc too, somewhere around 100mhz should really be achieveable as there will be something like a 835 or 850 "oc" variant on the market using the same cooler and the usual crappy compound.

Runebeard
Impressive stuff indeed. I'm almost tempted to splurge some student loan on one of these

I'd deffo rather turn the fan up a little bit more than let temps creep up, I play my games quite loud so wouldn't hear it anyways.

Great combined effort though guys, keep it up

Techyandy
"It's got an Nvidia badge on it...I'm gonna go buy it!" Haha, so true

I am interested now to see where the 6970 comes out in relation; will it be better? Or will it be 10% less powerful but at a £100 lower price point?Quote

silenthill
Ive seen the sli performance for the 580 on GURU 3D and it is very similar to the 480 so for me no upgrade & no selling my 480s on eBay, I think Ill wait for the next generation or something with at least 50% more kick to justify the huge price tag and also there are no games that really demand more power right now so the Christmas dough will have to go this year on something ells.