To ensure that all reviews on Overclock3D are fair, consistent and unbiased, a standard set of hardware and software is used whenever possible during the comparative testing of two or more products. The configurations used in this review can be seen below:

CPU: Intel Nehalem i7 920 Skt1366 2.66GHz (@3.835 Ghz)
Motherboard: Gigabyte EX58-UD5
Memory: 3x2GB Corsair DDR3 1600mhz @ 8-8-8-24
HD : Hitachi Deskstar 7k160 7200rpm 80GB
GPU: Zotac GTX295
Graphics Drivers: GeForce 182.06
PSU: Gigabyte ODIN 1200w
During the testing of the setups above, special care was taken to ensure that the BIOS settings used matched whenever possible. A fresh install of Windows Vista was also used before the benchmarking began, with a full defrag of the hard drive once all the drivers and software were installed, preventing any possible performance issues due to leftover drivers from the previous motherboard installations. For the 3DMark and gaming tests a single card configuration was used.

Power consumption was measured at the socket using a plug-in mains power and energy monitor. Because of this, the readings below are of the total system, not just the GPU. Idle readings were taken after 5 minutes in Windows. Load readings were taken during a run of Crysis.
As you can see from the graph above, the GTX295 consumes up to 50w less power than the 4870x2. This is a stunning achievement by Nvidia made even greater when you consider that the card is actually 2 cards in one. As one would expect being that both the GTX295 cards are both reference designs, both cards are closely matched and consume the same amount of power.

Temperatures were taken at the factory clocked speed during idle in Windows and after 10 minutes of running Furmark with settings maxed out (2560x1600 8xMSAA). Ambient temperatures were taken with a household thermometer. As we use an open test bench setup consideration should be given to the fact that the temperatures would likely increase further in a closed case environment.
Again we see that both 295's exhibit similar results/temperatures. The card certainly did not feel as hot as the graph above shows, in fact the 4870x2 felt a lot hotter to the touch than the GTX295.
Overclocking 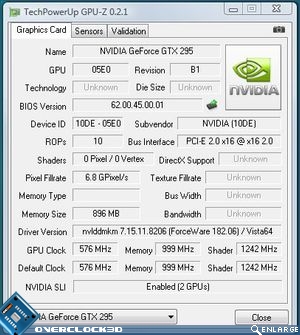 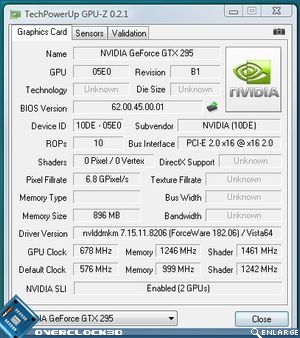 Sadly we could not repeat the results of the XFX GTX295, with the Zotac showing signs of instability before we reached the same clock speeds we previously achieved. Nevertheless, the Zotac GTX295 did overclock very well gaining 100MHz on the core and a massive 250MHz on the memory. This translated into some significant gains with regard to Call of Duty IV beating the 4870x2 by some margin. No doubt it may have been a different story had the 4870x2 been overclocked too but the graph above does show the effects of overclocking a card such as the GTX295 and the benefits that are there to be taken with 5 minutes of tweaking.
Let's move on to our suite of benchmarks where we pitch it up against the ATI 4870x2 and XFX GTX295 in our full suite of GPU benchmarks...
«Prev 1 2 3 4 5 6 7 Next»

I'm kinda confused as to why/if the 4870x2 lacks at high resolutions or cos of the quality/AA settings ? Any1 know ?

I was lead to believe the 4870x2 was a champion at very high resolutions, so maybe it is the quality settings ?

w3bbo
The 4870x2 was the champ at high res + AA. Not anymore as it appears the 295 handles high res better.Quote

Rastalovich
I'm with u now.

Gonna get much push on that 576mhz with same/different cooling ? 576 seems to me it'd hit 600 without squealing too much. Temps worry me tho. Although a very nice idle power.

zak4994
The XFX model is £20 cheaper but features the same things.

Except for the game bundle which could easily make you sway towards either card.

Rastalovich
Is it also a sign of the times that we don't hold too much difference between the cards from manufacturer to manufacturer.

I mean in the past I would personally have prompted for a Gigabyte silent card, then was quite taken by XFX and have bought them out of habit ever since.

But being honest, eVGA/Zotac/BFG/XFX/whatever, I wouldn't shun any of them - I know they'll all go for the same reference and same dodgy cooler. I can see it's a dodgy loud one just by looking at it. Different stickers perhaps.

As time goes by, different speeds appear on the shelf, but from what I've seen so far, they are the same cards and coolers, just factory clocked. Says to me what the basic one can achieve.

Be nice if one of them stepped out of the darkness with a really good cooler. Kinda like some of the ati variants u see.

Do-not like the nVidia 2 slot reference cooler one bit tbh.

Oh, yeah the bundles are the draw - bet ur arse XFX won't give u an 8pin cable