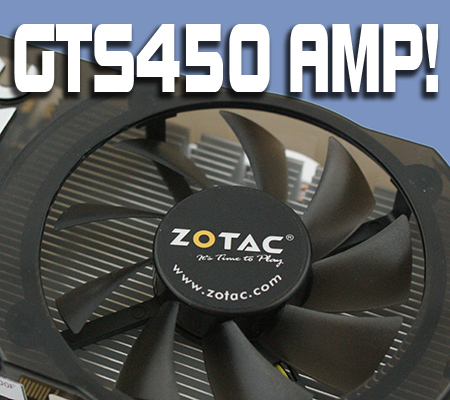 We enjoy many things here at OC3D. Of course one of the things we like most of all is serious hardware. After all, who wouldn't want to test many hundreds of pounds of kit?

But we also have guilty pleasures, and that's products that are extraordinary value. The motherboard that's under a ton but has the ability of a much more expensive unit. A £20 cooler that keeps your CPU running cool. A graphics card that's priced for the student/family man market, but can get it done.

With that smooth segue we have in our hands the 'Zotac GTS450 AMP!' which is our first look at the new range of low-end cards from nVidia. Soon to be joined by a 430 and a 440, does the Zotac GTS450 AMP! follow on from the Gainward 460 we reviewed last month as being a surprisingly good performer?

If the GTX460 was a cut-down version of the GTX480, but still with the potential to be great, the GTS450 is so cut-down as to almost be a different breed entirely.

However with less performance comes less power-draw and less heat. So instead of two 6-pin PCI-e power and a 160W TDP, we have a single 6-pin and 106W TDP. We all know that heat is the major drawback of the Fermi based chips, so this definitely should run much cooler than the other models in the range.

When it comes to clock speed Zotac have really pulled out all the stops and then some for the AMP! model. The GPU runs at 875MHz, a huge increase over the stock card. With the shaders being linked to core speed this gives us a shader speed of 1750MHz.

Time to have a look.

Complex!
Thanks for the review!

SnW
Quote:
Exactly what i am thinking wonder what the price will be in Holland...Quote

tinytomlogan
Quote:
Doesnt overclock for toffee tbh. For [email protected] you are much better off with a 460 as this is a cut too far imho.Quote