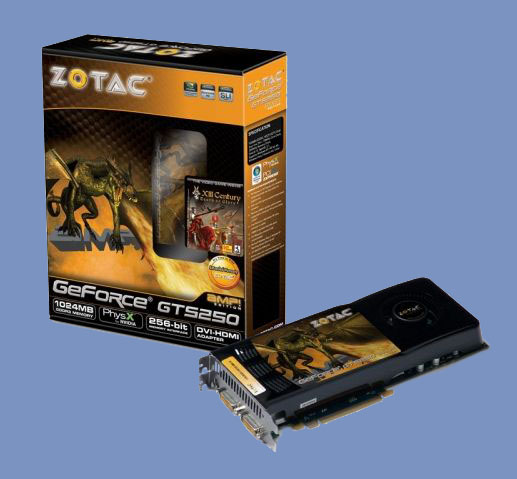 The Zotac GTS250 AMP is clearly a very capable card and while it couldn't quite surpass the HD4870XXX, it did easily outpace the HD4850XXX in the majority of benchmarks run today. That said I would wage the benchmarks would have been much closer had the HD4850 been a 1GB version. Nevertheless, most of the cards on test today, particularly the HD4850 and HD4870, were overclocked editions and thus the comparisons between those and the Zotac GTS250 AMP seemed fair.
The packaging of the graphics card was very good and could have been near perfect has there been an included SLI bridge and should the card have been placed in an anti-static bag. I didn't get chance to play the game but any game is good as long as it doesn't add to the price. 3DMark Vantage is a great inclusion and will save the user $20 should you want to run the benchmark more than once.
The additional clocks obtained on the card during the brief overclocking session were disappointing but as the card is pre-overclocked anyway this is a null point. I would have liked the card to run cooler than it did and I was shocked to see just how much juice it took from the PSU. Considering that the card only needed a single 8-pin PCIe power cable and as the card is based on the 55nm fabrication,  I didn't expect such readings. That said, because the card makes use of a slightly modified version of the stock Nvidia full card cooling solution, the noise was kept to a minimum and it was certainly much quieter than the cards it is competing with.
In short, here's a card that nestles itself  neatly between the HD4850 and HD4870 both in terms of price and performance. The GTS250 AMP retails at around the £150 mark which may be a little rich for some when you consider the 1GB overclocked 4870's retail for not a lot more. Nvidia sadly, have always demanded a higher price premium  and here is perhaps the only fault I can really aim at the GTS250 AMP. However, if you are dead set on a mid range graphics card that can handle pretty much anything you can throw at it and want that performance without having to overclock yourself or to bear the terrible din ATI cards throw out then I can whole heartily recommend the Zotac GTS250 AMP edition.
The Good
- Performance
- Quiet running
- Great packaging
The Mediocre
- Price could be more competitive
- Power consumption a little high
- Questionable PCB colour
The Bad
- Nada