To ensure that all reviews on Overclock3D are fair, consistent and unbiased, a standard set of hardware and software is used whenever possible during the comparative testing of two or more products. The configurations used in this review can be seen below:
i7 Rig

CPU: Intel Nehalem i7 920 Skt1366 2.66GHz (@3.8 Ghz)
Motherboard: Gigabyte EX58-UD5
Memory: 3x2GB Corsair DDR3 1600mhz @ 8-8-8-24
HD : Hitachi Deskstar 7k160 7200rpm 80GB
GPU: Zotac GTS250 AMP 1GB
Graphics Drivers: Supplied by Nvidia
PSU: Gigabyte ODIN 1200w
During the testing of the setups above, special care was taken to ensure that the BIOS settings used matched whenever possible. A fresh install of Windows Vista was also used before the benchmarking began, with a full defrag of the hard drive once all the drivers and software were installed, preventing any possible performance issues due to leftover drivers from the previous motherboard installations. For the 3DMark and gaming tests a single card configuration was used.

Despite having the benefits of 55nm fabrication, the GTS250 AMP still draws plenty of power from the socket. While the figures above are from total system draw, the G92 based GTS250 still consumes a large amount, especially when under full load.
Temperatures

Temperatures were taken at the factory clocked speed during idle in Windows and after 10 minutes of running Furmark with settings maxed out (2560x1600 8xMSAA). Ambient temperatures were taken with a household thermometer. As we use an open test bench setup consideration should be given to the fact that the temperatures would likely increase further in a closed case environment.
It has to be said that the Nvidia cooler is very quiet, and while it's perhaps not the most efficient of coolers, it keeps temperatures under control. The GTS 250 is a hot card and even though this card does not have an IHS, the exposed core still puts out enough heat to raise the temperature to a scorching 83c under load. This, as with all the tests above was with the fan set to AUTO so temps would no doubt improve should you set the fan manually.
Overclocking
For our overclocking tests I used the RivaTuner utility which worked perfectly with our setup. To test stability I ran 3D Mark 06 and a few runs of Call of Duty 4. 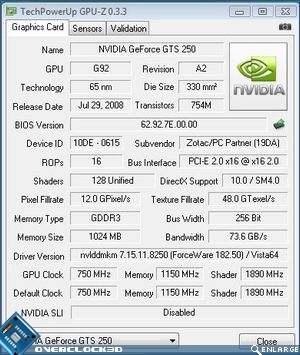 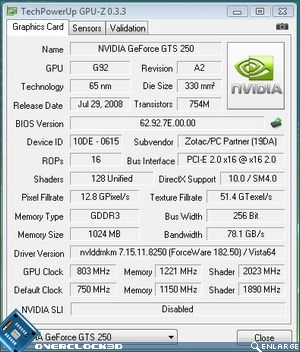 As this card is already overclocked as standard it came as no surprise that the gains to be had from overclocking the card were not great. I still managed an extra 53MHz on the core clockspeed and a further 72MHz on the memory. The affects of this minor overclock can be seen below:
So then, the GTS250 AMP is clearly a card on the edge. Working to it's limits has had an affect on both power consumption and temperatures as no doubt the stock clocked version of these cards would draw less power and run cooler. The overclocking, while minor, did have add a few FPS to COD4. It would have been nice to have greater overclocking freedom one needs to consider this card arrives in a pre-overclocked state and as with most overclocked cards, any additional clockspeed to be had from tweaking cannot be guaranteed.
Let's see how the card performs in OC3D's suite of 3D benchmarks...
«Prev 1 2 3 4 5 6 7 Next»