Packaging & Appearance
Swathed in the familiar company colours of black and orange, the GTS250 Amp box is attractive from the outset. Despite me not being a fan of beasts/elves/warriors etc adorning the front of any product, the dragon spewing fire on the front of this box is somehow fitting to the black and orange theme so I will let it go on this occasion. The same mythical creature is to be found on the GPU itself if the window cutout is anything to judge by. A sticker across this window shows us that  the included game with this package is the XIII Century 'Death or Glory' - a game I have not tried so I cannot comment on how good/bad this inclusion is I'm afraid. Below this sticker we find the main title of the card along with a few features and a small AMP emblem. Switching to the rear of the box we find Zotac have gone into great details to explain the video and graphics advantages this card will afford the end user. 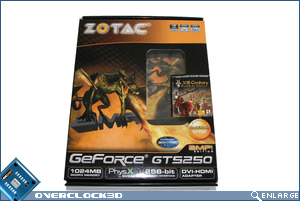 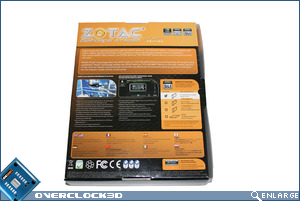 Upon opening the box, I was greeted with a plastic shield which protected the contents of the box as well as preventing them from falling out of the box window! I am becoming a great admirer of Zotacs packaging as everything is neatly stowed away yet easily accessible thanks to the Styrofoam cut-outs holding everything in place. Perhaps my one criticism is that the card was not protected by it's own anti-static bag but it seems Zotac feel this is an unnecessary addition.
The accessories included with the graphics card are as good as you are going to find anywhere. A driver and utility disc are complemented by separate Game(XIII Century) and benchmark (Futuremark 3D Vantage) disks. Two adaptors allow the connection of VGA/DVI and HDMI should you have the need and to power the card, a 2xMolex to 8-pin PCIe power cable. An S/PDiff cable and manuals round the list of nicely. Perhaps the only item missing is an SLI bridge but these bridges are normally included with motherboards which support SLI so you should have everything here to get you started. 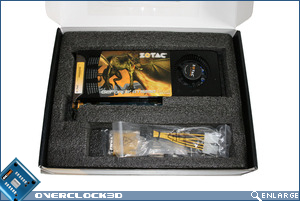 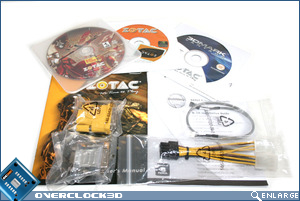 The card itself is slightly longer than the 512MB variant, having the same dimensions of the 8800GTX/280GTX. The cooler is however slightly different in that it has an additional set of vents that will help the card 'breathe more easily' near the back plate. Apart from that the stock cooler is pretty much a clone of other high end Nvidia coolers. Flipping the card over we see that Zotac have chosen to use an exposed blue PCB which is perhaps not the best colour to match the rest of the cards orange and black theme. As there are no memory chips on the back of the card to cool, a rear plate was deemed not necessary on this variant. The spaces for an additional 1GB of memory do however signify the possibilities of 2GB version of this card should Nvidia feel the need to expand the G92 range more. 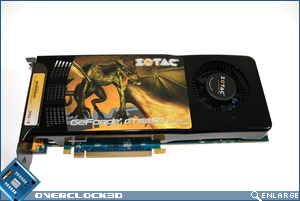 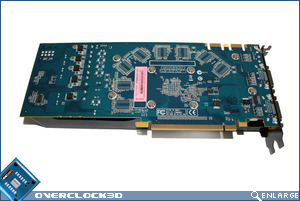 A nice touch of the card was to include 2x colour co-ordinated DVI ports. This effect was however, not mirrored with the standard black TV-out port situated left most to the orange DVI ports. Note that there is space for a power LED on the back plate but sadly, no such LED exists on the GTS250. TRI SLI is however possible with the GPU judging by the 2 SLI tabs situated in the normal place adjacent to the white S/PDiff port. 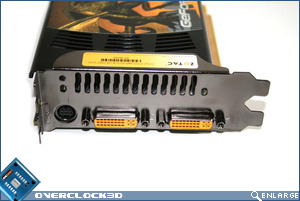 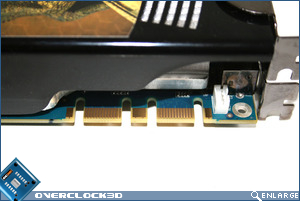 Another change from the 512MB card is the inclusion of an 8-pin PCIe power port rather than the standard 6 pin. This is the first card we have tested with a single 8-pin port so it will be interesting to see the power consumption of this card. While there is also space for an additional 6-pin port, the power requirements of the card are such that Zotac deem two power connectors unnecessary. The coolers fan is a standard affair found on most mid/high end GPU's with this cooler design and as such it is quiet in operation, even under moderate load. It isn't until the card is put under extreme load that it becomes intrusive. 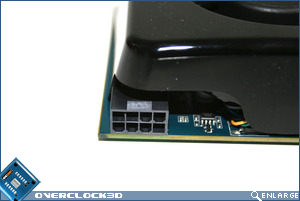 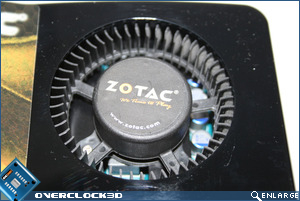 Removing the cooler was a moderately easy affair with just 8 spring loaded screws holding the full length cooler to the card itself. Thermal pads are the order of the day fro transferring heat from the memory to the aluminium heatsink. As with all heatsinks, copper would be a much better material to use but with all things copper, there comes an additional price which would inevitably effect this cards potential market. 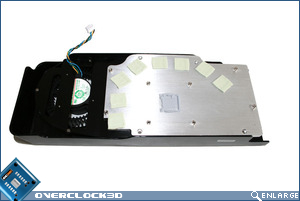 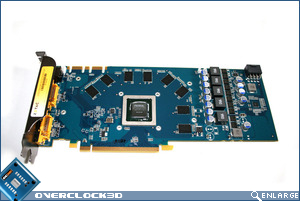 I was happy to see that this G92 did not have an integrated heatspreader over the GPU. The paste used on the core was very good if somewhat applied in an excessive amount. However, the mount was very good with a thin sliver of non-conductive paste covering the exposed core. Note that the cooler does not afford active cooling to the VRM's with all ten Mosfets simply being cooled by airflow rather than the heatsink. This is also the case for the SLI chip, which again receives no contact with the cooler itself. 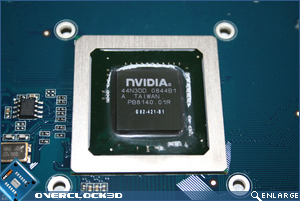 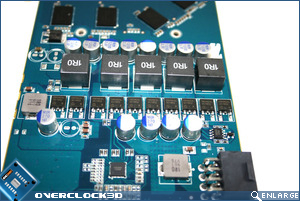 I must say I am becoming very impressed with the Zotac range of GPU's and the manner in which they are being presented. Despite the odd choice of PCB colour, this is one fine looking GPU and one which should arrive safely on your doorstep thanks to the very good method of packaging.
Let's move on to the test setup section of the review where I will also analyse the operating temperature, power consumption and overclocking potential of the GTS250 AMP edition...
«Prev 1 2 3 4 5 6 7 Next»