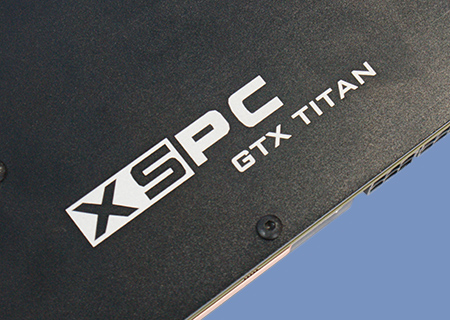 Whereas once upon a time water-cooling was the territory solely for the well-heeled or mad, nowadays it's pretty much a given that any enthusiast system will be liquid cooled rather than air.

Not only for the temperature benefits, but also for the vastly reduced noise that you obtain. As more and more systems move from offices and bedrooms into the lounge, silence is a key component. Let's not kid ourselves though, a well-designed water-loop just looks much cooler than air too. No matter how much we try and remain aloof and deal with hard facts, we're enthusiasts and hardware nerds too here at OC3D, and there is always a level of glee from a nicely laid out system with bright coolant humming through it.

If you're one of the lucky people and have managed to get your hands on the nVidia GTX Titan, then today's review will be of particular interest. We're looking at the XSPC Razor GTX Titan waterblock.

Waterblocks aren't the most inspiring visual feast, but the XSPC number is at the very least simple. This allows it to be sleek inside your case or, if you have some artistic flair, a plain surface to express yourself. We're especially fond of the backplate, an area of the GTX Titan we thought could do with bolstering.

What is less obvious from our photos is that the fin density has been doubled. Fin density is a major component in the surface area available, and so this should dramatically enhance the available performance. With 7 ports enabling you to fit it into your loop in the manner most aesthetically pleasing, and the acrylic top allowing for LED lighting. And who doesn't love a bit of glow... 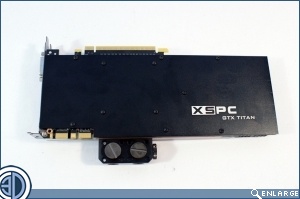 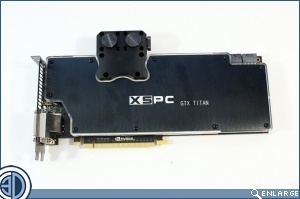 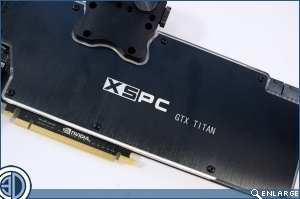 UkGouki
omfg wow watching the vid a the mo but Wow!!Quote

That's quite a reduction in temps, plenty of room to play with the volts and not fry the card.Quote

Bartacus
Tom, you've got semen on your shirt mate! Get that cleaned up!Quote
Reply