XFX are one of those companies that we don't come across too often. They have a niché and they are willing to stick to it. Rather than releasing 57 different varieties of the same product, instead you get a handful of which we normally review the one that will prove to be the most popular amongst the buying public.

Today that particular model is the THICC III Ultra. If you've been following graphics card news you can't have helped but come across the stories regarding the problems of the THICC II, particularly in terms of the undispersed heat and raw volume of the cooler, so it was with some trepidation that we approached the THICC III. The fact that this model has appeared so swiftly after the second one shows that XFX are accepting of the faults of the earlier THICC card though, so rather than let it quietly die off they have performed a mea culpa and hopefully fixed all those issues.

That is, as always, what we're here to find out. The RX 5700 XT Navi GPU has been a popular offering around these parts of late, with most of the graphics cards we've recently reviewed falling under the Radeon banner, so there has never been a better time to not only discover if the THICC III Ultra is everything the THICC II should be, and how it compares to the other partner cards on the market.

As an aside, can we stop typing THICC yet? It sets our teeth on edge. What's wrong with thick? It reminds us of the Gigabyte Xtreme. Modern spelling is frustrating. Ahem. Onwards to see how the XFX performs. 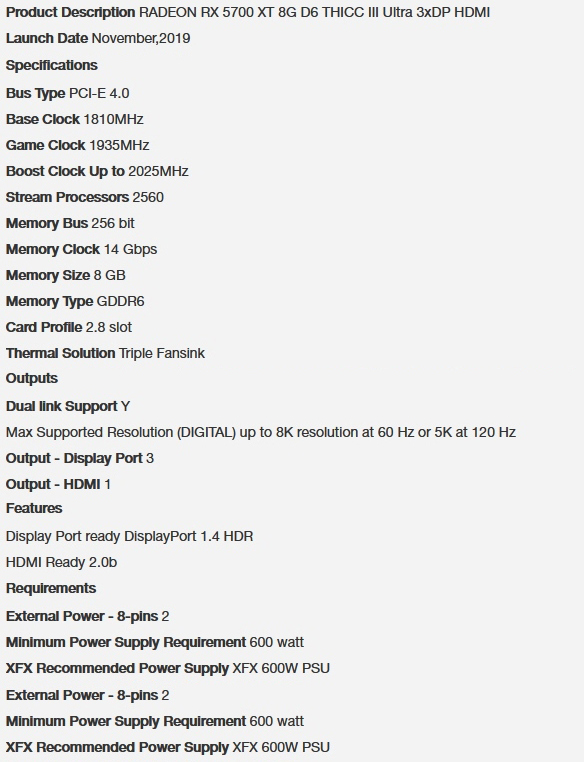 Excalabur50
I watched this review and I agree with you Tom, it's great that XFX took it on the chin and then made a better product as now more people will by their product knowing they try and do the right thing.Quote

AlienALX
If at first you don't succeed, make another card.

23RO_UK
It's about the only triple slot card I'd entertain buying, I love it's aesthetic - kudos to XFX for going back to the drawing board and returning with a great product.Quote

Yttersta
Quote:
I remember Evga sending free thermal pads to everybody for screwing up with their original 10 series cards a couple years back. To compare these two, Evga used mostly regular post for things that weighed 5 grams, and occupied near zero space in shipment. XFX is shipping an entire cooling assembly that weighs over 500grams, and takes up as much space as a hard cover book.


Evga got worlds of praise, XFX is talked here in quiteness really.

Funny story, a year ago or so Evga tried to charge me - as the unhappy customer - around the globe shipping for a defective product that was under warranty (CLC280 that had the worst cold plate defect that would cause the shape of the plate to push any thermal paste out within days, which also died within a few days of the RMA request very luckily - I didn't send the cooler in as getting a new one from Corsair was about the same cost as the shipping Evga wanted). I share this experience because of how much it was that they charged me as XFX must be going through a lot of shipping costs because of this. Well done XFX.Quote

Warchild
the nicest looking card on the market.

The ONE and ONLY thing I dislike is when looking at it from the front. The chrome plate inbetween each fan looks flimsy and cheap. The rest of it just oozes excellence.Quote
Reply