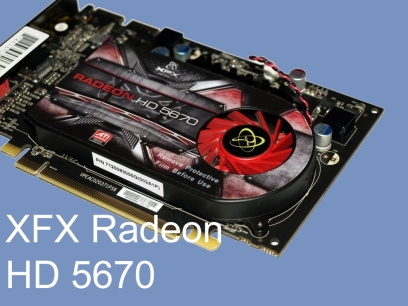 Today you'd expect ATi to be feeling rather smug...and you probably wouldn't be wrong either. Just short of six months ago, ATi dropped a terrific bombshell with their Radeon HD 5850 and 5870 graphics cards, introducing Direct X 11 and much more in the process. Time goes on and nVidia had yet to respond...so mercilessly, team red fired another missile with the launch of their £500 ultra high end HD 5970 solution. It's not even as though ATi's R&D departments have spent the following days twiddling their thumbs either as they have also filled the Radeon HD 5 series line up with affordable variants priced in at £120, £80 and £40; the HD 5700, 5600 and 5400 series. At Overclock3D, we can safely agree that the Radeon HD 5800 series has been tested to death. Now adamant that it's time to set our sights on something new, we wish to take the XFX Radeon HD 5670 1GB GDDR5 graphics card for a spin.

First founded in 2002, XFX is a major large scale manufacturer of graphics cards. The XFX badge was once confined to products of nVidia graphics cards, only to become an Add In Board partner for ATi from Late 2008/Early 2009. The firm is well known for it's innovative products, often sporting hefty heatsinks and substantial factory overclocks. With this in mind, we have great expectations for today's review sample.

Unlike certain factory overclocked XFX graphics cards, the Radeon HD 5670 operates at it's reference clockspeeds of 775MHz and 4000MHz. Now that we've covered all of the necessary background information, I believe it's time to fully commence this review.

a8875624
Just wandering - how does the Microsoft Flight Simulator X FPS graph have a higher AverageFPS than Maximum FPS??Quote

Mul.
Quote:
This is usually caused by reviewers who are a tad blind...

This has now been fixed. Good spot

thestepster
mate get the 5770 i did like u made a mess up gettin the 4670 but mines was the 1gb it was still gash get the 5770 and xfire it! u might match the 5870 in performance synthetic? still one im watchin other than folding gpu's!!!Quote
Reply