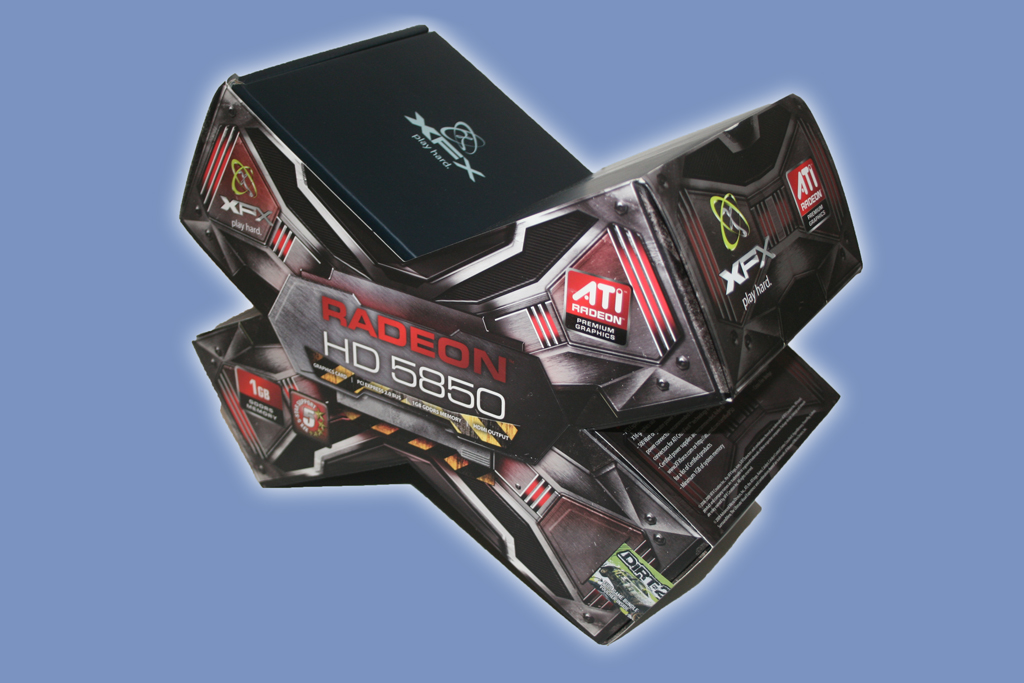 We recently got our grubby little hands on the HD5870 and were so impressed by it that we gave it our prestigious 'Performance award'. Much the same as the 3 and 4 series of Radeon graphics cards from ATI, the HD 5870 has a little brother, the HD 5850.  While not having the extreme level of performance as the range topping HD 5870, the HD 5850 offers greater value for money.
XFX are relatively new to ATI graphics cards being that they were once a stalwart of Nvidia, however XFX are keen to grab a greater share of the GPU market and have now spread there wings to include the red teams offerings. This began with the 4000 series of ATI GPU's which due to their success it is unsurprising they have followed up there lineup of GPU's with the latest 5000 series of graphics cards from ATI. I've always been a big fan of XFX, due in part to their dedication to the enthusiast market. We are now familiar with seeing XFX release pre-overclocked versions of graphics cards and while the HD 5850 we have for review today is stock clocked, XFX will surely follow this up with a 'XXX' edition with maximum overclocks to boot if past history is anything to go by.
Lets here what XFX has to say about their HD 5850:
Taking 3 enormous steps toward realistic gaming, the The XFX Radeon HD 5850 with Eyefinity Technology, gives the first-ever wrap-around in-picture experience to fully immerse yourself in the game, or maximise your productivity at work. Additionally, with ATI Stream Technology, boost your systems performance by offloading tasks originally sent to your CPU, to your GPU and max out your settings with the first ever full support for Microsoft DirectX11.
Specification
The following information was taken directly from the XFX product page:
As you can see, the GPU clockspeed is down 125MHz from 850 to 725MHz when compared to the cards bigger brother, the HD5870. The card retains the old 256bit bus interface but as we saw with the HD 5870, this is no real big issue at present despite the whopping 1GB of GDDR5 running at 4000MHz.
Let's take a look at the card itself...
«Prev 1 2 3 4 5 6 7 Next»

Tempting indeed, especially at that sweet-spot £200

Ham
Hmm, is it finally time for a worthwhile upgrade from peoples 8800GTs and GTXs.Quote