It has been a very interesting couple of months in the GPU market with the emergence of new releases from the graphics card giants in this sector, ATI and NVIDIA. With the 9800GTX failing to live up to expectations and the 9800GX2 being ridiculously priced, NVIDIA sought to further increase its lead over ATI with the unleashing of its GTX200 series of GPU's. The new cards however had the traditional 'your card for a kidney' price tag with the flagship GTX280 costing an wallet crushing price well above £400. Even its little brother, the GTX260, cost in excess of £300 which in days gone by would have easily purchased you a flagship model so it was with no surprise, enthusiasts were slow to take advantage of the new technologies on offer.
ATI in the meantime had been busying themselves with the 4800 series of cards which, if you believed the rumours, were about to trump NVIDIA in both power and price. Add to that the worldwide economic slump meant that NVIDIA had their backs to the wall with many PC enthusiasts finding little reason to buy expensive graphics cards that offered little gain for a lot more cost.
Time, as they say, stands still for no man. With the release of the fantastic ATI 4800 Series of cards, Nvidia have had to drastically reduce the price of the 200 Series in retaliation. Which is nothing but good news for the consumer as it means the GTX260 can be had for much less than the original RRP, currently weighing in just above the £200 mark. XFX, being a top tier NVIDIA partner, have both stock clocked cards and overclocked editions available and it is the latter of the two we will be looking at today in the form of the 'XXX' edition. 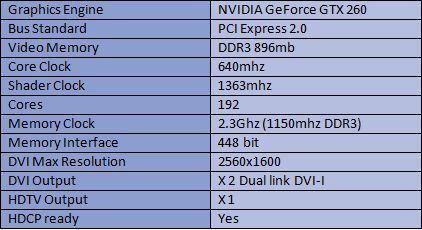 • 192 Processing Cores
• 2nd Generation NVIDIA® unified architecture
• Full Microsoft DirectX 10 support
• NVIDIA SLI® technology
• NVIDIA PureVideo® HD technology
• NVIDIA PhysX™-Ready
• NVIDIA CUDA™ technology
• PCI Express 2.0 support
• Two dual-link DVI-I and one HDTV output
• Dual-link HDCP-Capable
• OpenGL 2.1 support
Immediately noticeable is the massive overclock applied to the core. From a stock 576mhz, the boffins at XFX have increased this value to a mouth watering 640mhz and the memory clockspeed has also been enhanced by a whopping 302mhz to 2.3Ghz.
These values now exceed that of the GTX260's bigger brother, the GTX280. With this increase in speed it becomes obvious that some speed binning has been performed which inevitably attracts a higher price point but at around £245 this is still more than £50 less than a GTX280 but £60 more than an ATI HD 4870 so it will certainly be interesting to see if that extra cash is worth the premium you are going to pay for a XXX edition of the GTX260.
Lets take a look at the card itself...
«Prev 1 2 3 4 5 6 7 8 Next»

Rastalovich
Quote:
Well this was taken over 4 months ago, so things may well have changed a bit.

It is interesting to me that with more-or-less the same setup with the 2 mid range 260 cards switched out for the 280, the stock 280 3dmarks make the decision of 1 card vS 2 a very simple one.

Also shoddy to reflect that XFX use exactly the same packaging on the 280 as with the 260, even down to forgeting a 8pin pcie adapter.

AndrewDrinnan
Quote:
Was it that long ago? Ooops my bad for not checking the date.Quote
Reply