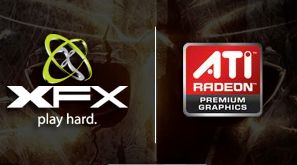 In times gone by, if XFX were a stick of rock and you cut them in half, no doubt they would once have had Nvidia written through the middle. Times however, change and with the ever increasing competition in the GPU market. XFX have decided to sell cards from a company who are traditionally a major rival, ATI. Despite making business sense, it is still somewhat of a surprise that XFX, such a pillar of strength for Nvidia have decided to sell cards of Nvidia's most hated rival - ATI. While XFX's market share is certainly not the highest, the XFX brand is very popular among enthusiasts, due in part to the overclocked editions XFX are synominous with.

"JUDAS!" scream Nvidia. Well not quite. XFX still intend on selling Nvidia GPU's and with Nvidia's GPU market share of standalone GPU's being around the 60% mark who can blame them. What XFX are attempting to do is tap into the 40% or thereabouts remaining. XFX are still adament that their partnership with Nvidia is as strong as it ever was and now they have the marketing power to meet the demands of the enthuiast regardless of your preference to the red or green team.

One has to wonder what XFX can possibly bring to the table that isn't already there but as we have seen with the flagship single GPU card, the XFX4890XXX (reviewed in full here), XFX know a thing or too about what the end user wants: Supreme packaging, useful accessories and perhaps most importantly, overclocked editions backed up with 5 star support. So then. let's hope this is the case with their new ATI range of GPU's. Can XFX deliver? I think it's time we found out.

Let's sit back now and take a brief look at what each card offers in terms of packaging and appearance...

Seems like that the 4850 would be a good choice.Quote

AntiHeroUK
Great round up Rich. That must have taken a lot of work to put it all together

AntiHeroUK
Quote:
I suppose they will have to do