Test Setup
To test all of our GPU's, we use a system that bottlenecks them as little as possible. Here's the trusty test rig:
Intel Core2Quad Q6600 @ 3.6GHz
Asus P5E3 DDR3 Motherboard
Kingston HyperX PC3-11000 CL7 DDR3 2gb Kit
CoolerMaster Realpower Pro
Hitachi 7K160 HDD
Samsung DVD-RW
Noctua NH-U12P Cooler
Dell 2405FPW Display
Please note that we have set the overclock on the Q6600 to be able to keep our test setup fairly consistent as the speeds of CPU's increase in the near future.
Benchmarks Used
Again, Overclock3D has revised its benchmark setup to really test the new DX10 GPU's, while still including some old favourites in there: 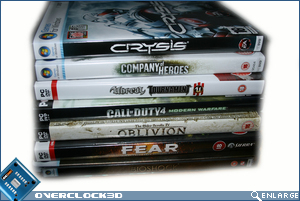 summet that the people with the money, and wanting performance must have then...Quote

FarFarAway
And the people wanting to have overclocked, hand picked GPU's backed up by an excellent warranty and support packageQuote

Rastalovich
Quote:
Yeah I`d go along with that tbh.

It`s a great review, and I have to be honest with ya`ll, my experiences of oc`ing the 8800GT alpha weren`t the best - and I don`t really put it down totally to the hardware, more the tools required to do it also.

I`d probably be more inclined, in the current climate (things can change of course) to get something above the reference clock and see what minimal % I can go higher than that.

Looking at the price, I don`t think it`s too bad. I can remember my card be around £225 on release.

Hicks : 'Well you're not reading it right!'

Phunky
The COD4 results seem strange to me i get basicly the same if not better results on my 320mb 8800 GTS!Quote
Reply