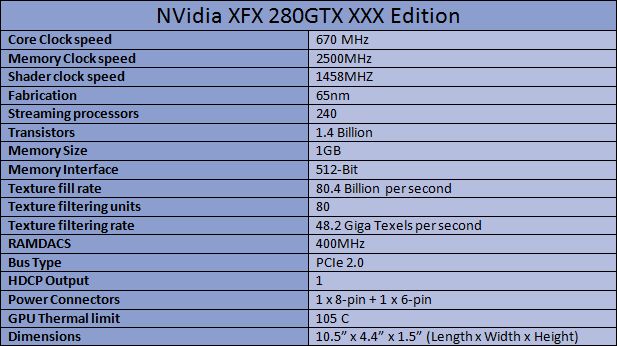 As you can see, the GPU clockspeed has been increased just over 10% from a stock 602mhz to a toasty 670mhz and the memory has been hoisted up to to a head spinning 1250(2500) MHz from a stock 1107(2214)Mhz, meaning that the Shader clock speed has also increased to  1458mhz - an 11.2% increase from stock 1296mhz! Mouthwatering overclocking from XFX! However, we at OC3D will never be content with a manufactured overclock and we will see, later in the review, how much more performance we can squeeze from the card. For now though, lets take a look at the packaging and presentation.
«Prev 1 2 3 4 5 6 7 8 Next»

Mr. Smith
Q. What is innovative about this product?

I don't understand why it was given that award. Decent review, lacking on game benchmarks though

w3bbo
No offence intended m8 but did you actually read the review or just skim over it? The review was aimed more towards PhysX, something I don't feel has had enough exposure. I could easily have benched it against a number of other cards which has been done time and time again. We have already reviewed a stock GTX280 so the overclocked 280 would give a predictable increase in scores and make for some pretty bland reading. I did include some benchmarks against other cards at the end to show the 'predictable' outcome so felt little need to emphasize that fact by running it on 6 or 7 titles. I would like to have seen some more benchmarks run on PhysX enabled games but they are few and far between as it is new and INNOVATIVE technology, incorporating PhysX into a GPU.

I just wanted to show some of the benefits other than raw FPS otherwise every review would be the same, which is not what people want to read imo - maybe I'm wrong?Quote

Rastalovich
Good review, I like the smell of this card.

Thing Mr.Smith may be leaning at with the PhysX aspect is.. well.. the 9800GTX will do the PhysX too, and so on.

%age of "good" games that come out and those games that utilize PhysX isn`t that big a margin. Sure it isn`t wildly touted as it could be, but I`m often surprised to notice the blue spinning lights of the PhysX card come on in games I had no idea used it. In particular users of the UT3 engine, and there have been a few.

I`d buy this card over a 4870x2 whenever presented the choice tbh.Quote

Bungral
I had a little read of this before bed last night. Some of the physics stuff looked good like shooting the cloth.. That was pretty cool. Will have a proper read later though.

One thing I did notice was that on the opening page I think it is when you mention how much it's overclocked from factory stock speeds you only actually mention how much one of the clocks is up by MHz.. You give 11% but I really couldn't be dealing with working it out and had to go find the other review for stock clocks as I couldn't remember (even though I owned one

Very small thing and just me being picky

w3bbo
Quote:
The thing is PhysX has not really been touched on in any great detail in graphics cards reviews, at least none that I have read and what better way to try it out than with a flagship card? This is something I thought would be of interest to folk aswell as put a different take on the review rather than stick to the norm. A predicatble review is a boring review that no one wishes to read - hence the emphasis on PhysX which hopefully some folk have found interesting.