Rainbow Six: Sieve has been one of Ubisoft's many success stories within this console generation, and frequent updates have helped to keep player online long after the game's 2015 release date.

With update 4.3, PC gamers have been given the opportunity to try out Rainbow Six: Siege with the Khronos Group's Vulkan API, which adds several new features to the game and promises increased performance across a wide range of PC hardware.

In this article, we will be looking at Rainbow Six; Siege's performance across a wide range of graphics cards, including models from AMD's Polaris, Vega and RDNA architectures as well as Nvidia's Pascal and Turing lineups. This testing will help us tell you which API is the fastest, Siege's classic DirectX 11 version of Ubisoft's new Vulkan API implementation.

More information about that Rainbox Six: Siege's use of Vulkan is detailed here.

When testing Rainbow Six: Siege's latest PC update, we opted to use the newest drivers from both the Radeon and Geforce camps. These drivers are AMD's Radeon Software Adrenalin Edition 20.1.4 driver as well as Nvidia's Geforce 441.87 driver.

1080p Performance - The Power of Vulkan

At 1080p, we can see that the impact of Vulkan is mostly positive, though some graphics architectures clearly benefit more from the change than others.

With this in mind, we will discuss the performance impact of Vulkan on an architecture-by-architecture basis.

This makes sense given Siege's heavy use of Asynchronous Compute on consoles, a feature which has been used to great effect to get more performance out of AMD components in other PC games.

Looking at Nvidia's RTX 2080 Ti, our guess is that the graphics card is CPU limited, or otherwise performance constrained. This makes sense given the game's incredibly high framerates. Perhaps a higher-end processor would enable us to achieve higher framerates with this graphics card. 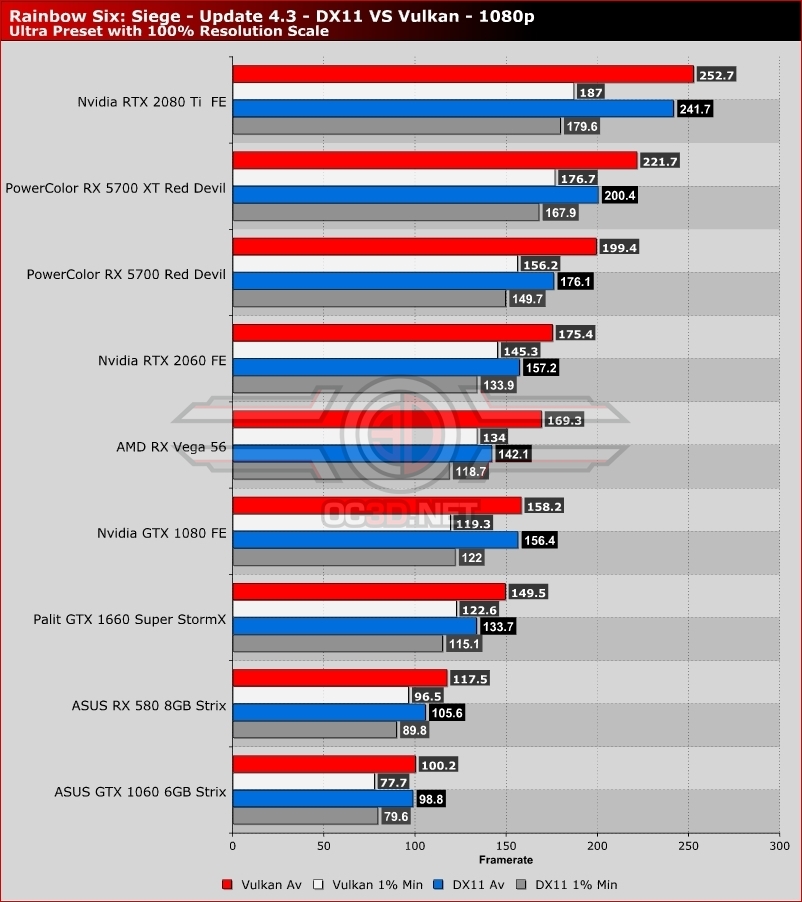 NeverBackDown
Just wanted to say. THANK YOU for including the GTX 1080 in the benchmark. You'd be surprised how many reviews go live these days without including this card despite it's popularity...


Other than that based off my 2 runs of DX11/Vulkan with my GTX 1080, I came to the same conclusion, but holy moly what a difference Vulkan makes for everything else!
We were CPU limited before and that 2080ti basically gained 30 FPS at 1440p. That's insane.

What is even more interesting, is Ubisoft said in their testing of Vulkan vs DX12, Vulkan offered better CPU performance. I'm not surprised with a 2080ti making that big of a jump. This is probably one of if not the best modern API implemnation in any game. Seems to be stable too.

I will stick to DX11 with my GTX 1080, just for sake of stability, but if they can continue to improve then I will switch over eventually.Quote

AngryGoldfish
That's a huge performance jump. It makes me wonder why more developers don't use Vulkan. It seems to be consistently a good performer. There are a couple of outliers if I remember rightly, but generally it's been consistent for developers to eek out the most from their engine.Quote

NeverBackDown
Quote:
It takes a lot of work to rewrite an entire pipeline and getting the same stability, performance, etc. Lack of tools and support out there as well. However as time goes on it grows and therefore will gain popularity.


Quote:
That's the joy of reducing CPU cycles for needless things. Speeds everything up considerably!Quote

Warchild
im curious now how from a pure gaming perspective AMD holds up against Intel. Since Intel still has that edge.

Talking about if Vulcan was widely adopted.Quote
Reply