At the ultra high resolution of 4K we finally see one GPU pull ahead, but surprisingly it is AMD R9 Fury X, which is almost unheard of for an Nvidia branded title.

Like pretty much every game these days The Division is pretty hard to run at 4K, though both GPUs maintain a framerate of above 30FPS at even high settings at 4K, which is something that no console could even imagine, nevermind actually achieve.

AMD's R9 Fury X has always been a great competitor at 4K, with it;s High Bandwidth Memory (HBM) likely securing it this victory over our reference GTX 980Ti, though please note how similar the minimum framerates are for both GPUs.

With this being a beta version of the game it is likely that performance will improve before release foe both sides, especially given how big a release this game is going to be. I expect to see optimized driver from both AMD and Nvidia before this game releases, so let's hope we can maintain 30+ FPS on Ultra settings or a stable 50+ FPS on lower settings when it releases. 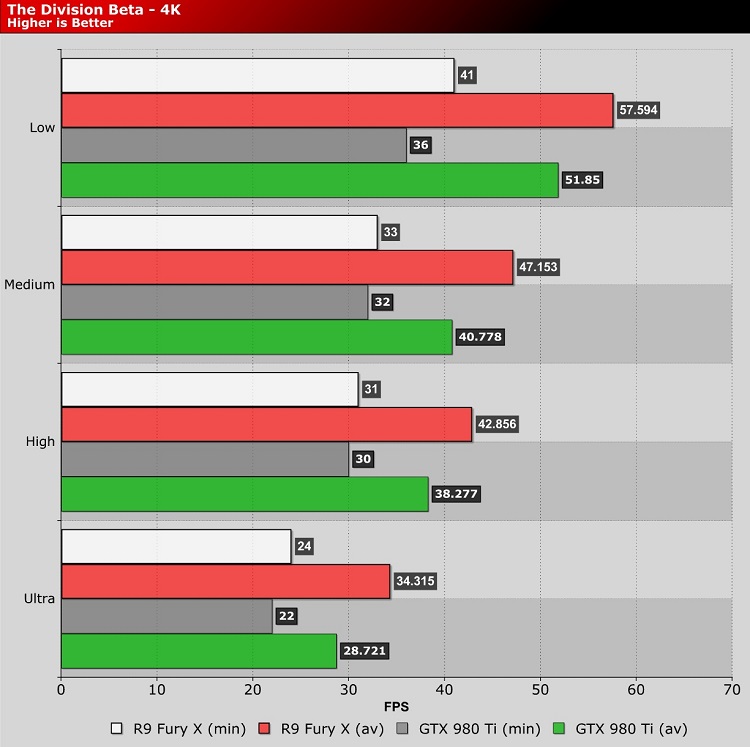 NeverBackDown
In his recent testing AMD seem to be doing better overall than Nvidia.Quote

Dicehunter
Quote:
Seems AMD have stepped up their driver game