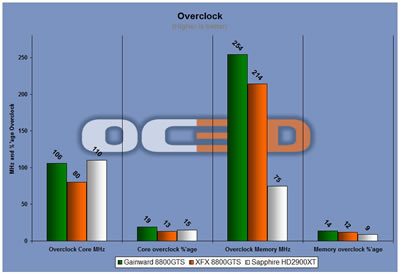 I ran a 3DMark and here's what we get: 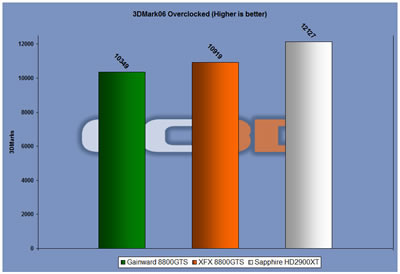 Not too shabby and certainly shows the HD 2900 XT as a decent overclocker, if you can stand the fan noise. Perhaps some more exciting forms of cooling would let you push that little bit further. Although the HD 2900 XT fell short of what I could achieve on the 8800 cards, the overclocking on the HD 2900 XT seemed to affect the 3DMark score quite a lot more.

in 3dmark it dominated

FarFarAway
Tis nice looking, not kind on the ears thoughQuote

mVp24
Quote:
I heard a crossfire setup of those. Man oh man hecka loud! If ATI sorted their size/power/noise issue, then I'd have definitely considered an HD2900XT.Quote

Ham
Not a fan on the sandwich heatsink. The 8800 Blocks are expensive enough, the 2900s are going too need even more copper = higher price again. Same goes for after-market air coolers.

at the oblivion resultsQuote
Reply