To ensure that all reviews on Overclock3D are fair, consistent and unbiased, a standard set of hardware and software is used whenever possible during the comparative testing of two or more products. The configurations used in this review can be seen below:
i7 Rig

During the testing of the setups above, special care was taken to ensure that the BIOS settings used matched whenever possible. A fresh install of Windows Vista was also used before the benchmarking began, with a full defrag of the hard drive once all the drivers and software were installed, preventing any possible performance issues due to leftover drivers from the previous motherboard installations. For the 3DMark and gaming tests a single card configuration was used.

Power consumption was measured at the socket using a plug-in mains power and energy monitor. Because of this, the readings below are of the total system, not just the GPU. Idle readings were taken after 5 minutes in Windows. Load readings were taken during a run of Furmark.
Power consumption of the Sapphire HD4890-Vapor-X was nothing really to shout about. While idle power draw was fairly low, when placed under full load the power consumption rocketed. One has to bear in mind that this is for the whole PC setup taken at the socket and not the card itself but still, the 4890 was among the hungriest of GPU's in our list.
Temperatures

Temperatures were taken at the factory clocked speed during idle in Windows and after 10 minutes of running Furmark with settings maxed out (2560x1600 8xMSAA). Ambient temperatures were taken with a household thermometer. As we use an open test bench setup consideration should be given to the fact that the temperatures would likely increase further in a closed case environment.
Despite the amount of power the 4890 consumed, temperatures were kept to a minimum thanks mostly to the Vapor-X cooling atop of the GPU. Idle temperatures were not fantastic but the load temps were nothing short of exceptional, especially when you consider the fan was running at AUTO speed which at the time rarely exceeded 40% ensuring that the graphics card temperatures were kept in line with ATI's specification while the noise emitted from the cooler was next to nothing.
Overclocking
For our overclocking tests I used the RivaTuner utility which worked perfectly with our setup. To test stability I ran 3D Mark 06 and a few runs of Call of Duty 4. 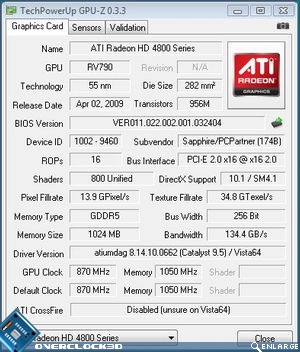 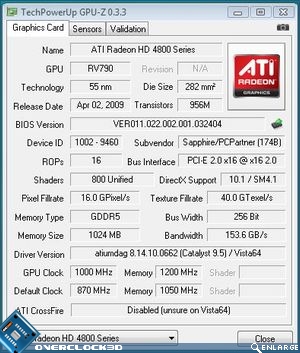 As with our previous reviews of the HD4890, the card maxed out the sliders on ATI's overdrive facility with both GPU(1GHz) and memory (1200 (4800 effective) ). With the card clocked at these massive speeds it has to be noted that the Sapphire Vapor-X cooler performed admirably, hardly spinning up at all during the test runs.
Here are the effects of the overclocks:
Call of Duty IV showed some good gains throughout at all the resolutions tested. Most impressive was the extra 14FPS gained at the lowest resolution of 1680x1050. It goes without saying that should you purchase the Sapphire Vapor-X HD4890 then you really should consider overclocking the card to the max. However, while there are benefits to be had from overclocking, this card might not need it so without further delay let's start up our suite of benchmarks starting with the synthetics...
«Prev 1 2 3 4 5 6 7 Next»

ali_james
Sweet review man, massive props to Sapphire for final sticking a non reference cooled card on the market. Any idea when these will be available?Quote

I wasn't sure that these coolers would make much odds over other after market coolers but those temps are pretty damn good.Quote

Is that cooler good enought?Quote

Sgt.Bilko
Well actually I am not quite convinced. You see almost solely based on this review I went merrily our and promptly bought 2 of these cards only to find that .

1) They run a lot hotter than stated. 67 Celcius at idle and run so hot when gaming that my PC crashes. I haven't managed to record the temp just before crash-poin but I have seen it at upto a blistering 93 Celcius!

2) I don't get anywhere near the FPS stated in the article. Infact I get exactly the same when playing CoD World at War online with 2 of these cards in crossfire as I did with one 9800GTX+. Namely 91 FPS.

I have plenty of ventilation in my rig and the fans on the HD4890s are certainly working.

At +4000rpm (confirmed by ATIs own CCC program and CPUIDs Hardware Monitor) they are audible let me tell you.

I don't believe my system is to blame despite it not being cutting edge.

Sapphire recommend a bigger PSU. 650W-750W and monitoring my temps with rivatuner.

I have a 620W PSU and run Vista ultimate 64 bit, which doesn't allow rivatuner to work since I downloaded the latest update if you can call it that.

All incased in a Aerocool Hi-Tech 7 cabinette with a 40cm fan on the side and 2 x 12cm fans, one infront and one at the back.

Any good advice would be appriciated.