Now we will compare the DirectX 12 and DirectX 11 versions of the game with this new patch, as while the DirectX 12 version has improved we need to know if this new version actually provides users better performance than what we can achieve with the older DirectX 11 API.

All in all it seems that those with AMD GCN 1.1 or newer GPUs will be better off playing Rise of the Tomb Raider in DirectX 12 whereas Nvidia users are better off using DirectX 11.

Sadly at this time I do not have any Nvidia Pascal GPUs to test at this time, so users of Pascal GPUs will have to test for themselves to see whether or not DirectX 12 offers them any additional performance. 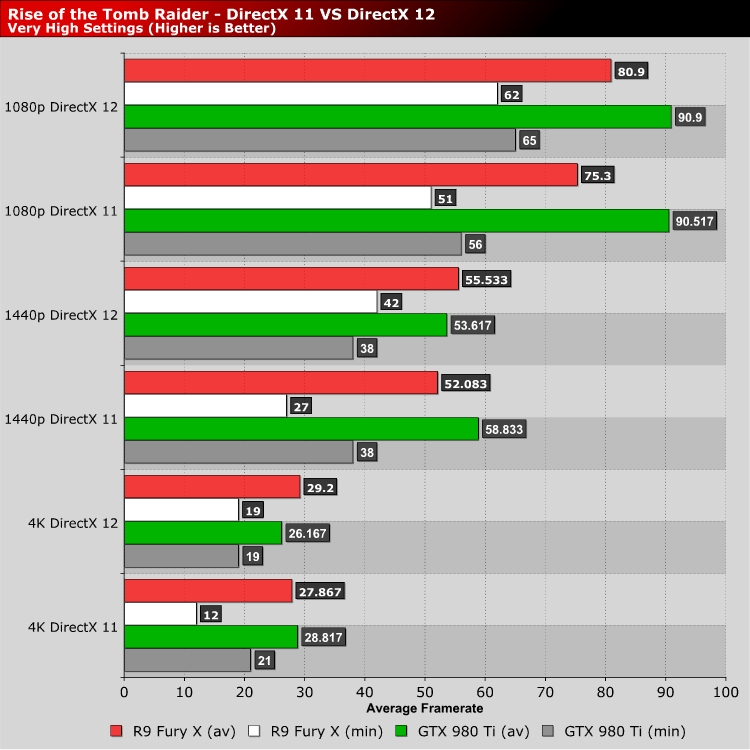 Damien c
Not played it for a while but based of my experience, SLI does not offer better frame rates in terms of max but should offer a slightly higher, minimum and average.

I might give it a try next week and see what the Frame Rate is like, as before they started patching the game, at 4K maxed out I was hitting up to 40fps with SLI 980Ti's but on average it was 30fps so no better, than a single card.

When they started patching it the performance dropped in terms of smoothness etc, it was turned in to a stuttery mess.

Are you just running the inbuilt benchmark tool with the settings left on the presets, such as High etc?

Also incase you are using it, turn off shadowplay as that affects the performance based off my experience by up to 15%.Quote

WYP
Quote:
Our benchmarks were done in gameplay, not using the benchmarking tool using the presets stated in the review.

In our testing we do not have the Geforce Experience or AMD Raptr installed.Quote

AlienALX
If I can ever get my wife's 8.1 to upgrade to 10 I will do this bench with Fury X vs Titan X