What is RSR? - How to Enable Radeon Super Resolution?

What is Radeon Super Resolution?

Radeon Super Resolution is the latest new feature to be added to the company's AMD Software Adrenalin Edition GPU drivers, offering PC gamers a high performance image upscaling solution that can be applied to almost any PC game.

Radeon Super Resolution is a post-process image upscaling solution that upscales images to higher resolutions after their are rendered. For example, if you have a 4K screen, Radeon users will be able to run their games at a lower resolution, like 1800p or 1440p, and use RSR to upscale their games to 4K.

Across the next few pages of this review, we will be looking at the image quality impacts of RSR, and its performance impact. 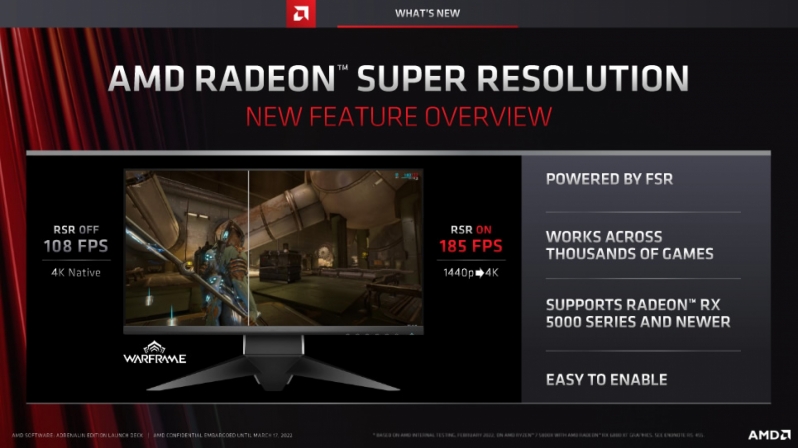 Yes and No. Yes, as both FSR and RSR are use the same upscaling algorithm, and no because RSR is a driver-level feature and FSR is a game-level feature.

With FidelityFX Super Resolution, game developers an integrate AMD's upscaling solution into an idea part of a game's rendering pipeline. This allows things like your game's user interface (UI) to be rendered at your screen's native resolution, and for the image to be upscaled before some post processing features.

Radeon Super Resolution (RSR) uses fully rendered frames and upscales them to a higher resolution. You tell your game to run at a resolution like 1080p. 1440p, or 1800p on a 4K screen, and RSR will upscale it to 4K. This will upscale all elements of a game, including its UI and post-processing details.

RSR gives an FSR-like experience to players of games that do not support the feature. As such, it works on virtually all games. That said, an in-game implementation of FSR should deliver better results. 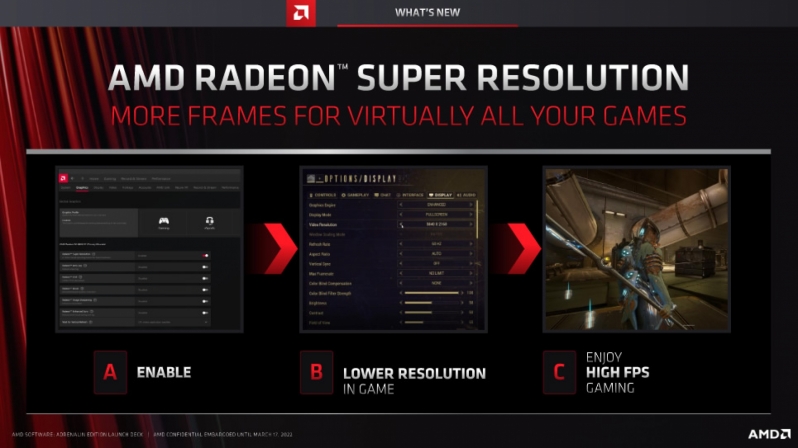 With RSR, AMD users can experience tremendous performance gains across thousands of PC games. In some cases, rendering a game at 1440p should not have huge visual downsides over a native 4K experience, but gamers should experience a huge framerate boost. 4K is an incredibly demanding resolution, and RSR makes gaming on high resolution screens a lot easier. 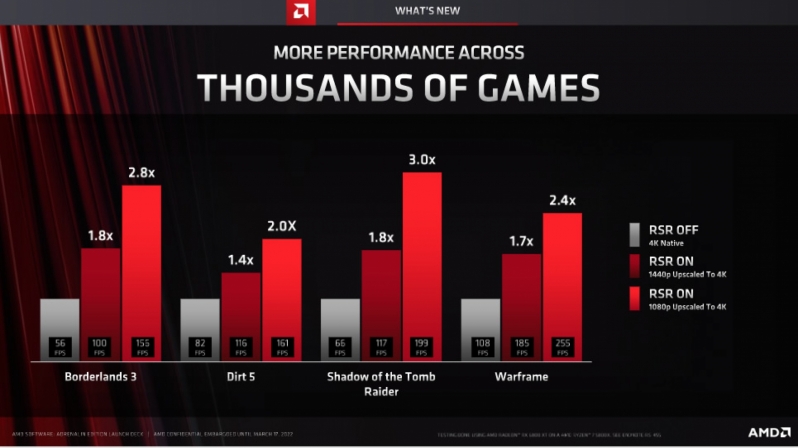 Yes. RSR is a driver-level feature that AMD offers on their Radeon products through their new AMD Software Adrenalin drivers. The feature is currently available only on AMD's RX 5000 series and RX 6000 series products, and on their RDNA 2 based integrated graphics solutions.

AMD's Radeon Super Resolution feature is a feature within AMD's drivers, as such, this technology is exclusive to supported AMD products.

How to Enable RSR

Within AMD's AMD Software GPU drivers, Radeon RX 5000 series and RX 6000 series users can enable Radeon Super Resolution by using the checkbox shown below. This checkbox is within the Graphics section of AMD's new AMD Software drivers. This feature can also be enabled on a game-by-game basis if desired. 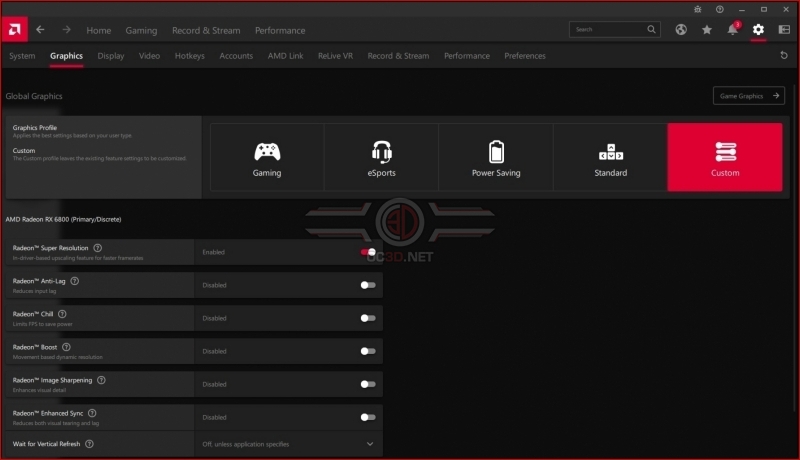 NeverBackDown
Very impressive. Wonder how the results would compare for 1440p native users who choose 1080p to upscale.Quote

Pathstrider
Just emphasises that Warhammer would really benefit from some sort of upscaler.

Given its intel sponsored, Im hoping itll get XeSS somewhere down the line.Quote

KingNosser
I ran a few benches on stuff it's not bad 20-35% uplift generally.

I also tested Red Dead Online and Crysis Remaster but wasn't able to log the fps but i couldn't see any difference myself in all of them thou the odd shimmering like FSR but overall if the game doesn't have FSR then it seems with these few worth using.

My Ryzen 1700 is the main culprit for my generally lower fps overall, but it's still a difference

One game that now runs far far better is Control butter smooth no little lags anymore for me, so i can see myself using this a lot if the game doesn't have FSR built in.