One thing that we need to remember with UWP app is that V-Sync is enabled by default, meaning that V-Sync is always turned on, which results in the minimum results here typically sitting at around 30FPS.

With V-Sync turned on the game will usually run at 60FPS or 30FPS, with lower framerates playing at some stranger framerates, but at 1080p both the GTX 980 Ti and the R9 Fury X are able to play the game with playable framerates that are at 60FPS in most situations.

Sadly when going above Ultra setting Quantum Break hits the AMD R9 Fury X hard, resulting in much lower performance than in the Nvidia GTX 980Ti, but with the lack of visual difference between medium and Max settings there is not much of a loss for the AMD R9 Fury X.

With V-Sync being forced on this can leave a huge difference between the 1% and the 0.1% minimum framerates, meaning that the game can have some highly significant micro-shutters that can occur sometimes during gameplay.

We can see here that even with the AMD R9 Fury X and the GTX 980Ti we are unable to get this game to play at 60FPS consistently, even at 1080p, which is a real shame for us PC gamers that are used to playing with a high framerate. It seems that forcing a game to run at 720p on a Xbox One results on quite a demanding PC release, which is something that we have expected ever since the Xbox One version's resolution was announced. 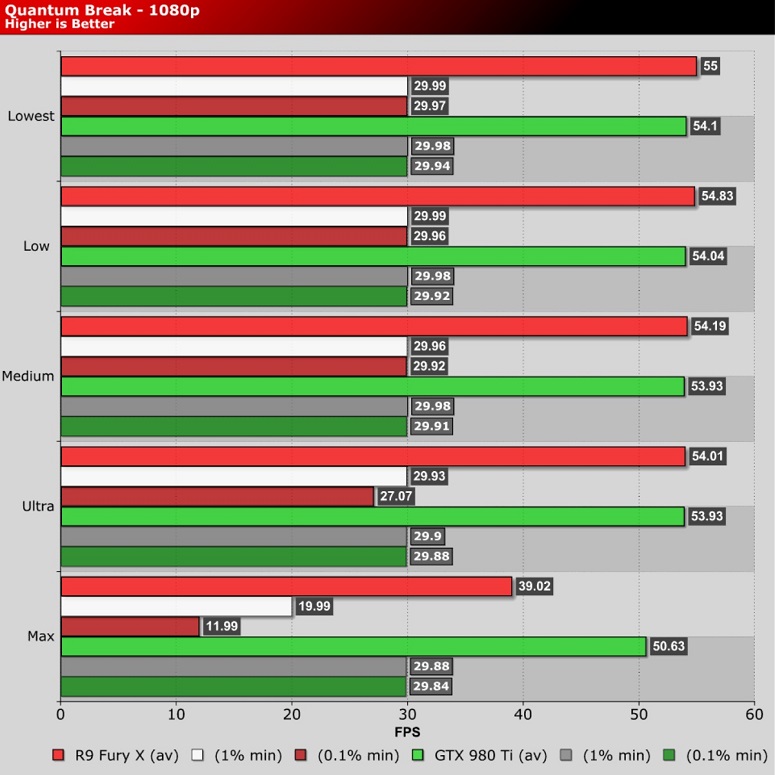 AngryGoldfish
For every GTA V, Shadow of Mordor, and Mad Max, with great gameplay, limited bugs and superb performance scaling, there is a Syndicate, Quantum Break, and Gears of War.Quote

I'm convinced this is a game with a couple of purposes. Firstly, to get Xbone users to try it on their computers as well, to either convince them that PC's are crap or to show them what's better on the PC. They failed at the latter.
Secondly, it's an experiment with UWP on the masses, to see if we will swallow this ****.


You have an important typo on the third page that gave me a glimmer of hope, but alas it's not true - ".. which is a shame since this game has now SLI or Crossfire support".Quote

WYP
Quote:
Typo fixed, thanks for the spot.

A lot of extra work went into this one, especially when it came to getting benchmarking data. I like the idea of percentile based framerate data, which is something that I will be looking more into for the future.Quote

SimplexPL
Quote:
So you were unable to run at solid 60fps at 1080p (which is effectively 720p if NeoGAF is to be believed) at lowest settings on "overclocked i7 6700K CPU and 16GB of 3200MHz DDR4 memory" and a 980Ti/Fury, yet reports that the game runs terribly are "exaggerated"?
This game runs terribly, period.

Not being able to sustain 60fps at the lowest graphical settings at 1080p (reprojected 720p) on a fastest possible CPU, memory and GPU means, that the talk on the internet about the "terrible" PC performance is accurate, not exaggerated. What is the last AAA game that run that badly?Quote