Today's review is a bit of a rarity around these parts, it's a RX Vega based GPU.

It can't have escaped your attention that there are very few RX Vega models on the market as the mining community snaps them up so quickly that there is almost no reason to advertise them or send them into review websites.

It was therefore with a reasonable amount of surprise that we saw PowerColor had produced a Nano model of the super-popular Vega 56 graphics card as we couldn't wait to see what it has to offer. Normally when we're reviewing PowerColor models that utilise an AMD GPU we're look at their Devil series. Can the more standard Nano still produce the goods?

The specifications for the PowerColor RX Vega 56 Nano are identical to the reference AMD Vega 56, with the GPU clocked to 1156 MHz and boosting up to 1471 MHz. As we'll see later on we can do better than that, but certainly if you are the type of person who just wants Vega's for mining it's good to know the PowerColor has the basics covered. 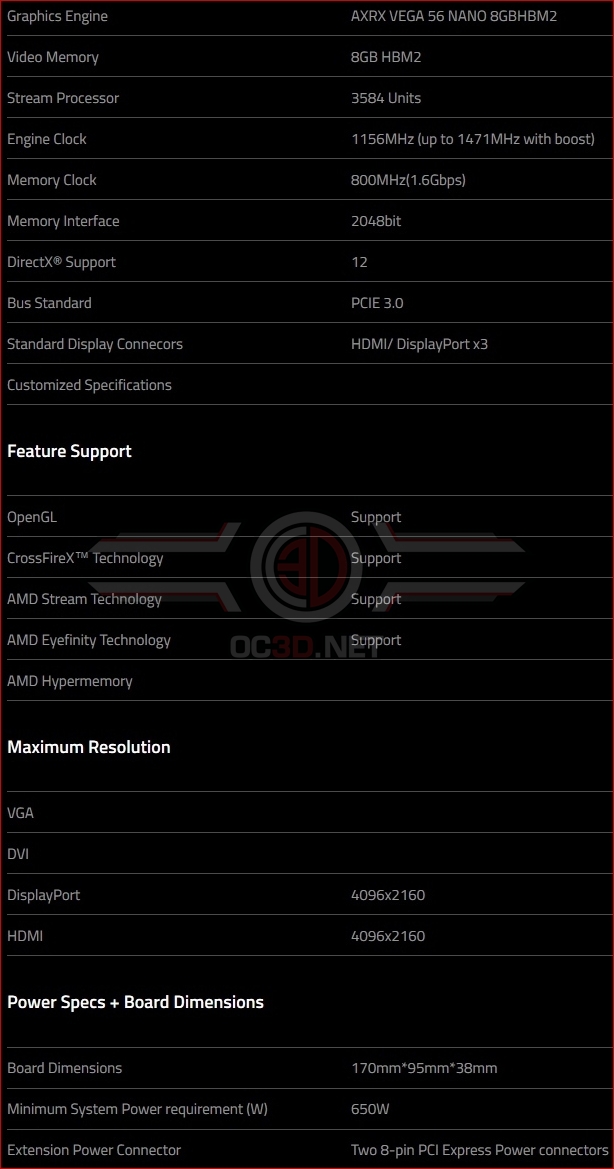 AngryGoldfish
What an odd GPU. I mean, the design of the NANO Edition is very good, but the BIOS seems a bit odd. Then again, Vega is just an odd architecture so I'm not really sure if PowerColor were just trying to pick the better of two evils. Users can still use Radeon Chill (which is excellent) or MSI Afterburner to hit the numbers they prefer. I wouldn't buy one of these necessarily over a 1070 or 1070Ti for a compact system, but it does seem like a cleverly-designed iteration.Quote

NeverBackDown
Would be interesting to see how it does under water. ITX cases with small GPUs just makes it 10000x easier to build a loop in. If it's anything like that last nano it's just a few % slower yet at half the power draw.Quote

AngryGoldfish
Quote:
Power consumption with undervolting (but still no OC) in Tom's testing show it's higher than at least one overclocked 1080Ti.

Even if you knew that or weren't referring to it, I still love saying it. It reminds me not to trust even guys as down to earth as Raja who make bold claims about their gear.Quote

NeverBackDown
I'm referring to the previous Fiji and fiji nano cards. I want to know if this is the same situation when overclocked. Within few performance difference yet half the power draw when under water(under water that way we don't get thermal throttled)Quote