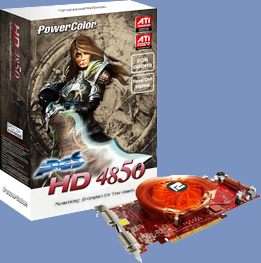 When it comes to bang-per-buck (or value for money for better use of an English term) when gaming on Vista's DX10 platform, the AMD HD 4850 is widely regarded as being in a class of its own. Sure it might not able to keep up with the likes of nVidia's GTX260 in pixel pushing performance, but as our CPF (Cost Per Frame) scale has shown on many recent GPU reviews, the HD4850 is literally untouchable when seeking the best frame rates for your hard earned cash.
As many of us will already know, the ATI/AMD reference card is bundled with a 512MB GDDR3 framebuffer which is regarded by most as being pefectly adequate for a mid-range GPU. However, with some AIB partners looking to seperate themselves from the rest of the market by means of more than just a few added accessories in the box, it wasn't long before 1GB versions of the card started to appear. Of course, this in theory is fine. Double up the frame buffer, probably grab an extra few FPS at high resolutions and hopefully gain a few extra sales in the process.
But where do you stop? At what point does slapping extra memory on to a GPU go from being a marketing stunt to a total waste of good GDDR3? Today it looks like we may well be given the opportunity to answer this question as we take a look at the latest in PowerColor's "PCS" line-up - the HD 4850 2GB! Let's check out what PowerColor have to say:
2GB GDDR3 Memory with Ultra Fast Memory Bandwidth
Industry’s first 2GB frame buffer and massive memory bandwidth up to 57.6GB/sec. Memory size makes a great impact on performance, even a powerful GPU can suffer from bottlenecks due to slow and insufficient video memory.The more the memory buffer, the more the data graphics can be saved - thus eliminating the need to access system memory and providing faster graphical performance. To satisfy the latest and upcoming games requirements, PowerColor PCS HD4850 2GB can fulfill high video memory request of those games and delivers high throughput for interactive visualization of large models and high-performance for real time processing of large textures and frames, enables the highest quality and resolution full-scene anti-aliasing (FSAA).

Going by the details available in PowerColor's press release, the PCS HD 4850 2GB looks every bit the same as their 1GB and 512MB versions. However, be it intentionally or not, there is one vital piece of information missing from the chart above which will directly affect the cards performance - memory speed.

As we can see from the screenshot of GPU-Z above, PowerColor have been forced to run the GDDR3 at 1800mhz. This is almost 200mhz shy of the default 1986mhz clock found on a reference HD 4850 card, and will undoubtedly result in a performance hit in the medium resolution benchmarks at the very least. We can only assume that this cut in memory speed is to guarantee stability with the 2GB frame buffer used on the card, which may not be able to clock as high as its 512mb counterparts.
However, let's leave the performance discussion to the benchmarks over the next few pages; and instead take a closer look at the card itself.
«Prev 1 2 3 4 5 6 7 Next»

PV5150
Nice review mate. Why oh why did they have to go and do that? I would have preferred some software (3DM06 etc) than extra memory that handicaps a card.Quote

gdawg304
...any word on the Powercolor HD 4870 PCS+ tho? clocked up to 800MHz on the core and with a Zerotherm cooler...OCuk have it for £182ish at the moment but I've seen no reviews anywhere yet.

I've seen a few reviews of the overclocked 4850s but if i'm dropping money i'll pay the extra for a 4870 or GTX 280 (depending on the 55nm version getting good reviews and not being eye-wateringly pricey). Want consistency too much to go for a dual GPU option when the biggest monitor i'm ever likely to have is a 24"

JN
Quote:
Don't really have any plans to review it at the moment, but if we get a break in the schedule I'll consider it. One thing I will say though is the Zerotherm/PCS cooler on the HD4850 does an extremely good job of keeping it cool.

gdawg304
Ah well - that's a shame. Thought the pre-OC'd 4870 would be a hot one to review considering the fuss over the standard card....I shall have to keep my eyes open I guess!

(Not to mention comparing non-standard cooling given the issues in reviews over the temps on the stock cooler). Still - there are only so many hours in the day for reviewing!

The one on the 4870 is a different design than the 4850 so I wonder how they compare.Quote
Reply