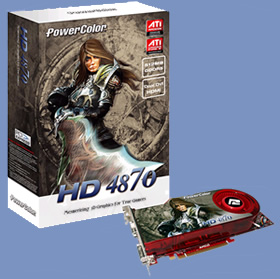 Just a few weeks back Overclock3D took a look at the latest mid-range card in ATI's new 4800 line-up. While maybe not the fastest dog on the track, the 4850 offered an unmatched performance to price ratio and even managed to give its dual-GPU'd predecessor; the 3870x2 a run for its money.  At the time we couldn't get our grubby mits on ATI's top-end card the 4870 so our comparison seemed slightly weighted in the favour of NVIDIA's GTX200 series. However, PowerColour - one of ATI's largest AIB partners has been kind enough to send over one of their stock-clocked 512MB 4870's and today we're going to be putting it head-to-head with everything the green team has to offer in both the performance and price stakes.
PowerColor are a company that most enthusiasts will have undoubtedly heard of , and with good reason too. Established back in 1997 by TUL Corporation, PowerColor have always been a dedicated AIB partner of ATI and have offered both enthusiasts and system builders extremely competitive pricing along with a no-frills approach to packaging and unneccesary accessories. Let's hand it over to Powercolor now and see what they have to say:
PowerColor spirit:
Unleash the Gaming Power
PowerColor is the platform of choice for avid PC gamers and video prosumers looking to get the best possible performance out of the latest graphics processors from ATI.

Reputable Product
PowerColor graphics cards won at least 10 awards every month in 2004 from the world's most respected IT media and organizations. Furthermore, several PowerColor products also received 2005 Taiwan Symbol of Excellence Award from the Ministry of Economic Affairs of the R.O.C. according to the following criteria: Design and Innovation, Quality System, Market, and Brand Awareness. This award represents some of the most revolutionary, high tech, high quality, and high value products in the market.

Market-Oriented Innovation
The right products, the right time, and the best quality is the basic of our product strategy. To put our products one step ahead of the rest, we analyze the trends of the industry, and study the requirement of the market. Meeting the market's requirement is the core of our branding strategy and our customers' opinions are always the most important part of this process.
...
On paper the 4870 may look like nothing more than a core and memory overclocked version of the 4850 with an upgrade to GDDR5. However, the transfer from GDDR3 to GDDR5 has given the 4870 a significant boost in memory bandwidth from 1.9Gbps to 3.0Gbps with an actual reduction in memory clock speed! For obvious reasons the GDDR5 architecture should also scale much higher than GDDR3, potentially giving us a lot more headroom when overclocking.

So with all this extra performance, will the 4870 be able to perform even better on our CPF (Cost Per Frame) scale, or will the higher price of GDDR5 and inflated top-end-product figures be the cards downfall. All will be revealed over the next few pages.
«Prev 1 2 3 4 5 6 7 8 Next»

Rastalovich
I`m a little supprized in that this card was pushed as being AMD`s answer to the GTX280, and the ensuing arguement about the price of the 2 was that the nVidia are having a laugh.

Looking at this review, it`s an overly obvious competitor for the GTX260 - which is fine, and the pricing is -£20 or so to nVidia, which kinda puts a difference perspective on things.

The 280 being that much more.. well yeah ok it happens to be the better card out of the 4 without "competition" (used loosely here), and the trend here is "pfft we`ll charge whatever we like for it" - just look at Intel with it`s cpus that compare to the AMD cpus and those that are beyond comparison.

In terms of loosely labeling that there is no competition.. well that`s kind of a misleading statement today. All 4 of the cards reviewed will not be held back in any way by games u throw at it in comparison to each other. The distinction is that on paper some to 10,20,30, whatever frames more than the other - the other already doing awesome frames. And the looks.. all 4 will give u an immensely pleasing experience.

This for me is where the OC3D cost per frame blows many reviews out of the water. There has been need for a change in review styles. Benchmarking doesn`t mean what it used to, in terms of gaming, perhaps bracketing only. Quality of picture is very hard to put over, other than u have to accept that they`ll all output at the same quality-standard. So what`s left is what u pay for them...

The strong arguement in addition to this is the screen sizes, and I think this may get more of a question as monitors get cheaper and standard resolutions get bigger. 20-22" widescreens mainly operate at 1680x1050 - this is almost being the norm for me. 24" above can be the same, with quality models offering the higher resolutions again. There`s even larger monitors out there being used where perhaps 24" was in the past.

With these thoughts in mind, the size of monitor vS the cost of the cards vS the capability of the card at the standard resolution u want - u should pick out of the 4. Smaller resolution, 17/19" square - 4850 will be fine, 24"+ u may chose the 280 and be able to afford it considering what u already purchased.

It`s sad that performance isn`t the stickler for selection - but having `quality` become a replacement for it isn`t wholey a bad thing.

PS. need more bumpff, when will manufacturers learn that graphic cards and mobos need to be accompanied with misc bumpff! Don`t care too much what it is, but c`mon.Quote

Acid90
Isn't there 8.7 catalyst drivers out now, apprently this gives an increase in peformance.Quote

JN
Quote:
Yeah. Was released about a day after we completed the benches of this card *sigh*.Quote

Jaster
Yeah I'm with Rasta on this one, you can benchmark something to the hills but have to put it in context with the rest of the equipment your using it on, I've had similar arguements with certain people (a family member who runs a water cooled 8800gt sli Q6600 rig but won't shell out for a decent monitor,he still has a 19inch curved 4:3 crt lg thats nearly 8 years old and refuses to part with it due to it costing him 600 quid "back in the day" go figure)......can anybody really notice wether fear is running at 130fps or 200fps....I think not....so picking cards on price per frame ratio I feel is a good balancing factor...kudos to OC3D for another good review...and good on ATI for finally stepping up to the challenge with there 4xxx series....Quote

Rastalovich
Quote:
Trouble is, u do a retest, write it up - and then nVidia bring a new driverset out.. and on..Quote
Reply