It's very difficult to review this latest batch of Nvidia cards and separate the underlying architecture and pricing from the vendors themselves. How much Nvidia sell them to the vendors affects the vendors pricing structure, and how powerful or not the cards are is also out of the vendors hands. They very much do the best with the tools that have been supplied to them. We could almost compare it to uploading things to Youtube. It doesn't matter how carefully you encode the video or the quality of the content, if Youtube's algorithm screws the video and their desire to boost the visibility of their chosen channels hides yours, then nobody will see it. You wouldn't blame the channel though as Youtube have so much control a lot of it is out of your hands. Such is the case with the GTX 16x0 cards.

One thing today's comparison tests do show is something which we all pretty much knew beforehand, namely the more you spend on the graphics card the better your performance will be. What is perhaps harder to swallow is exactly how consistent the performance was. In the old days you could overclock a card and usually expect to match the stock performance of the card above it in the range. Here though it almost looks like Nvidia have overclocked the cards first, then decided how powerful to make the next model up based upon that. Throughout our testing across a huge variety of titles the order was consistently GTX 1660Ti OC, GTX 1660Ti, GTX 1660 OC, GTX 1660, GTX 1650 OC, GTX 1650. If we were feeling less charitable we might suggest it's deliberate, that the various takes upon the Turing architecture have been artificially limited so that you'll be forced to buy the more expensive card if you want more frames per second.

Although we're largely concentrating upon the GTX 1650 StormX today it's worth taking a moment to mention the other two Palit cards in our roundup. Whilst the GTX 1650 is a little above MSRP, both the GTX 1660 StormX and GTX 1660Ti StormX hit the Nvidia MSRP of £199 and £259 respectively. Considering you're getting a card with a good cooler, all three display outputs options but still in a fairly compact format makes them both great choices. They might not be the belle of the ball, but at this end of the price spectrum performance is a massive consideration whilst aesthetics are so secondary they're almost thirdly. They both overclock well, stay cool, won't break the bank. Lovely.

The GTX 1650 StormX is harder to recommend. Sure it's also a decent take upon the GTX 1650 formula but, as we've said before, the GTX 1650 itself is a little overpriced for what you're getting. When money is this tight we'd be infinitely more inclined to go with the standard Palit GTX 1650 StormX rather than the factory overclocked one. The OC edition is £150 but the 'stock' StormX hits MSRP at a mere £138. With the knowledge that the Forceware drivers perform a good amount of automatic overclocking anyway, we'd save that eleven pounds and grab the regular edition. It's got the same compact cooler, the same display options, the same performance just for a little less money.

What makes the whole of the GTX 1650 range a tough sell regardless of manufacturer is the AMD RX 570. As you could see from our full graphs at stock it matches up to an overclocked GTX 1650, but there is lots of extra performance to be found if you take the time to overclock it. When budgets are this tight and the price of the model we tested, the MSI RX 570 8GB Armor, is the same as the GTX 1650 StormX OC then you'd be made to give up the ten or so extra FPS you're getting from the AMD card, and that's without considering the free games you get from the AMD model. It just makes much more financial sense and that's before you look at the twin fan cooler and full choice of display outputs available on that particular RX 570.

When we first heard about Nvidia returning to the GTX fold but utilising their Turing architecture we were hopeful that they'd price them extremely aggressively, but it seems they've almost been complacent neither undercutting their rivals on price or supplying enough extra games that it is attractive to those of you with very tight budgets. The Palit StormX does the very best with what it has to work with, it's just a shame Nvidia have given all the vendors such a tight rein. 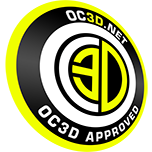 Discuss the Palit StormX series in our OC3D Forums.

Tolemac
I do like Palit cards I had 2 of them, a GTS 450 Sonic and my current Jetstream GTX 1080. I have not had any issue with eitherQuote

demonking
Quote:
I assume you mean GPU only seeing as this is in reference to GPU review?
A "gaming" rig for £300 is just un-realistic, I've tried for friends before and what you end up with is the worst PC possible, rubbish processor, hardly any and very slow ram, a gpu that can barely encode H264 a mechanical drive, case made of recycled coca cola cans and a psu that is so bad you expect to see it in a 1990's Packard bell. You'll be lucky to run chrome on a £300 rig let alone a AAA title at 1080p unless we are classing sub 30fps as gaming?


Quote:
Agreed, I have a 1070 palit dual, noting wrong with it, might give 2fps less than the £100 more Asus and no RGB but as far as user experience goes, its a 1070 hardly any difference between the models.Quote
Reply