We might be reaching the end of October with all the chilly weather that entails - unless you're one of our antipodean cousins - but the hardware world is heating up. Not only are we getting close to the launch of the next generation of consoles, but as anyone who has been following the Nvidia, Ampere reviews will know, the PC gaming master race is also currently white-hot.

After the massive success of the RTX 3090 and RTX 3080, today we're looking at the middle card in the Ampere range, the RTX 3070 Founders Edition. If the RTX 3090 made every game weep under its insane performance, and the RTX 3080 smashed the RTX 2080 Ti for significantly less investment, then the RTX 3070 will combine those two things to make anyone who has purchased an RTX 2080 Ti weep for their bank account. If you doubt the increase in performance and reduction in price the Ampere cards bring then let's not beat around the bush. For nothing like the money of even an RTX 2080, the RTX 3070 matches the RTX 2080 Ti in performance. Usually, we wait to give away the results. Still, we already knew the Ampere cards were incredible and the RTX 3070 carries this on, halving the cost of you getting the performance of the previous generation flagship.

If you're coming here post-launch, it's worth bearing in mind that we can only write about and judge things based upon what we know empirically and as we haven't yet seen the new Radeon, much less tested it, it doesn't have any bearing upon our conclusion.

Eyes down for a full house.

Cross-generational comparisons are always curious. We know that everything gets faster as time goes on, and whilst we appreciate that Nvidia wants to show the RTX 3070 FE in the best light by comparing it to the RTX 2070 FE, if it were our company we'd be shouting from the rooftops about how the real world performance matches the significantly more powerful RTX 2080 Ti. Given that the boost and memory clocks are very close between the two x070 cards, it shows how much has been unleashed from the GA104 GPU when compared to it's Turing brother. 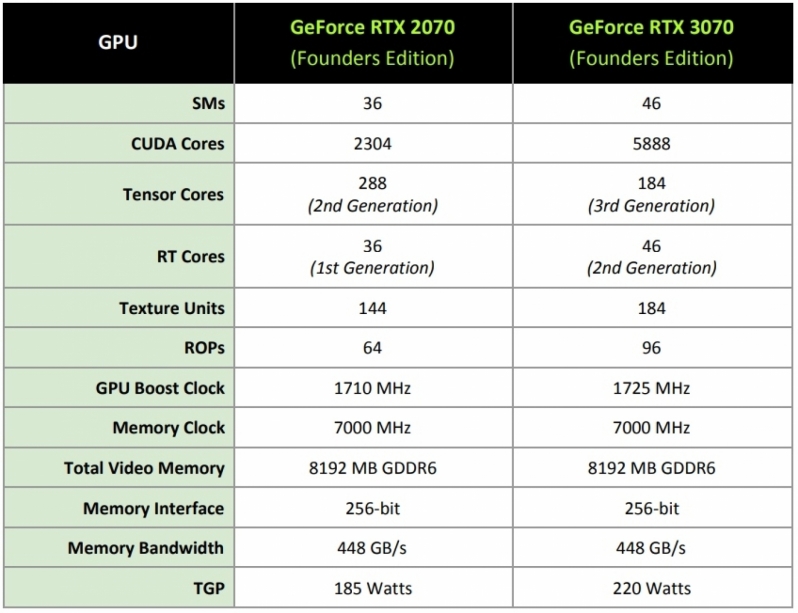 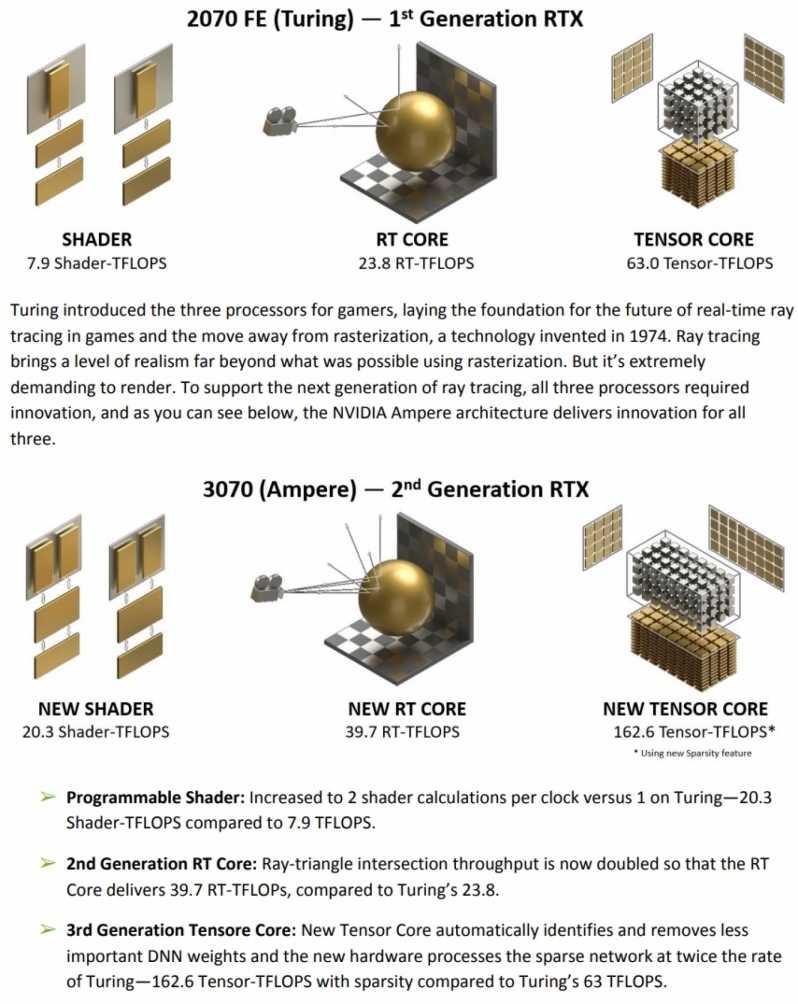 Shame about the 12pin, feels like Nvidia are trying to force that one on the masses at the moment, Warranty still invalidated by using anything other than the supplied adapter?

Hopefully these are actually available but the rumour mill is that these are in short supply too. Lets hope not, these are priced pretty well though longevity of 8gb of vram might become apparent in the near future.

Next week will tell how well these are priced

KingNosser
Seems like a decent little card, but why 8pin to 12pin cable needed why not just use an 8pin seems really un-needed to me, and like all the 3k series it's slap bang in the middle of the card like a huge sore thumb.

Otherwise it's actually a better card than i was expecting far closer to the 2080ti, but it's not faster than a 2080ti Nvidia marketing at it's best.

but yea not bad tbh.Quote

AngryGoldfish
So it's faster than a 2080Ti even in some Ray-Traced games, draws less power, is more than half the price, and has an excellent cooler design. But 8GB is pretty feeble, power draw is not great, availability is likely to be meagre, the price is still high for a midrange card, and it's slyly reviewed the day before AMD announces a likely superior alternative.

KingNosser
When it comes to AIB's can expect to see these selling at £525+ imho so it's a long way from the £469 of the FE and the chances of you getting one well good luck.Quote

AlienALX
Quote:
It starts to creak at 4k, usually allowing the 2080Ti to win. In fact overall the 2080Ti does win in Hardware Unboxed's review.

Which is kind of annoying really. I mean, had they found a way to shove it to 10gb or 12 or 12 this card could be bargain of the decade. Instead? it's a Macdonalds. It will fil you up for about ten minutes and then you'll be hungry again.

1440p is such a grey area now too. It seems to be where all of the high end previous gen cards go to die. So there are many in that category, all of which provide a very pleasant gaming experience.

TBH I would rather have seen this at £80 more, with more VRAM. Because it would have prolonged the life of this card another year or more. Instead? once those heavy hitting new console games designed from the ground up to utlilise all of their power? it's going to struggle something rotten.

I suppose all of this is fine when you have a 1440p monitor, but the whole thing being rammed in our faces by every manufacturer of everything now is 4k.

What it does do, however, is give AMD a really big chance of getting a foot in and making tons of sales.Quote
Reply