In recent years nVidia graphics cards have always fallen into two distinct camps. When a new product is released it's usually fairly revolutionary in performance terms and thus has a huge swathe of early adopters. Those people who rush to their credit cards to splash out on the latest generation of GPU do so with the knowledge that not very far down the road will be the Ti variants which always deliver more a more refined gaming experience. Thus buying the latest card comes with the joy of knowing you own the fastest thing around, but the bittersweet tinge that you will be soon looking over your shoulder at a product which is better than something you've only just put out a hefty outlay on. Of course this means that there will be people out there who have the patience to see a card like the GTX 1070 and know that if they take the pain of waiting right now, the benefits will be there soon enough.

It wont have escaped your notice that the GTX 970 had something of a difficult birth, but all the issues which existed for that were rectified in the GTX 1070. Now with the GTX 1070 Ti upon us and the problems of the 970 a distant memory it's time to take a look at the nVidia Founders Edition and see what the baseline is for these new additions to the Pascal range.

Even recently the next model down from the flagship was equipped with a different GPU than the brand leaders, but the GTX 1070 Ti is built using the same GP104 GPU that we found in the GTX 1080, a card which still chucks out some hugely impressive frame rates. It's aimed squarely at those of you who game at 1440P, the sweet spot between great DPI and performance. 4K is the buzzword but you need to spend a ridiculous amount of money to obtain a smooth gaming experience. The 2560x1440 resolution though is a lot more forgiving and the 7.2 billion transistors of the GTX 1070 Ti hit it square in the plums. The resolution target isn't the only place we find the number 2560 having some significance. The GTX 1080 had 2560 CUDA Cores - the parts that work the magic of bringing you glorious visuals - and the GTX 1070 Ti GP104 GPU comes with 2432 CUDA Cores, a mere 128 fewer than the card that many of us still dream of.

Memory comes in at a speedy 4 GHz effective from the 8GB GDDR5 of 256 bit loveliness. With a TDP of 180W the GTX 1070 Ti certainly hits all the sweet spots on paper, so we need to discover how well  it works in practise. 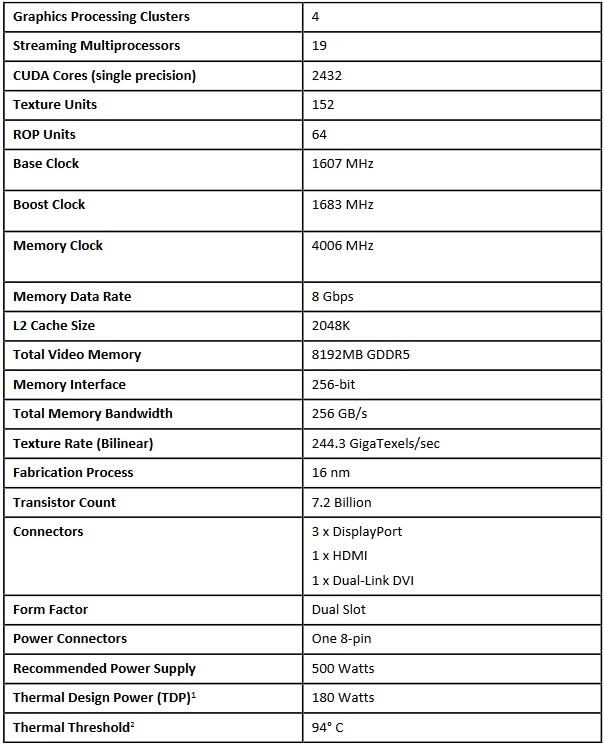 AlienALX
Very disappointed tbh. Way closer to the 1070 than I thought it would be.Quote

AverageNinja
Thanks for the review Tom!

I actually really like the card, but they're really overpriced atm (at least here in the Netherlands). They're going for about €580 here. I could get a brand new 1080 for less from Amazon. Still one to watch for when prices drop, though.Quote

Wraith
So it's nothing more than a binned 1080 with cheaper memory, and telling board partners not to sell cards as OC'd when you can OC them... [email protected]#k move from Team Green.Quote
Reply