So it can't have escaped your notice that recently AMD have emerged from the shadows to finally put up a fight against the all-conquering GTX780 by releasing the R9 290X. A card which had us singing hooray at the amount of performance there was available to us from both brands, even if AMD seem to be desperately scrambling to catch up to the GK110.

In the best demonstration of moving the goalposts that we've seen in a while, no sooner had the Radeon finally caught up with the nVidia offering and breathlessly muttered 'your it', than nVidia coughed slightly and reached into its coat and pulled out the GTX780Ti and chuckled off into the night.

Now the Ti suffix has had a variable life, with some cards benefiting far more from the tweaking than others. The difference between a GTX650 and a GTX650Ti is quite pronounced, the GTX550Ti .. less so.

Given that the GTX780 not only came out of the traps as a beast of a thing, but in MSI Gaming guise is still our favourite card on the planet, we have to say we're somewhat sceptical about how much extra performance can be squeezed from the Kepler GPU, so let's crack on and see if this is merely an attempt to distract the buying public from the R9 290X, or a genuine upgrade.

The original GTX780 was somewhat of a cut-down GTX Titan. Whereas the Titan had 2688 CUDA Cores and 224 Texture Mapping Units to go with its 6GB of GDDR5, the GTX780 only had 2304 CUDA Cores and 192 TMU's respectively, as well as a reduction to 3GB of VRAM.

So it's far to say we were shocked to see that the GTX780Ti has not only returned the reduced CUDA Cores but gone beyond the GTX Titan, bringing us a whopping 2880 CUDA Cores and 240 TMU's. The level of memory has remained at 3GB but it's seen a huge increase in speed from the 6008MHz effective of the Titan and vanilla GTX780, to 7000MHz on the GTX780Ti.

On paper at least this has the potential to be something very special. 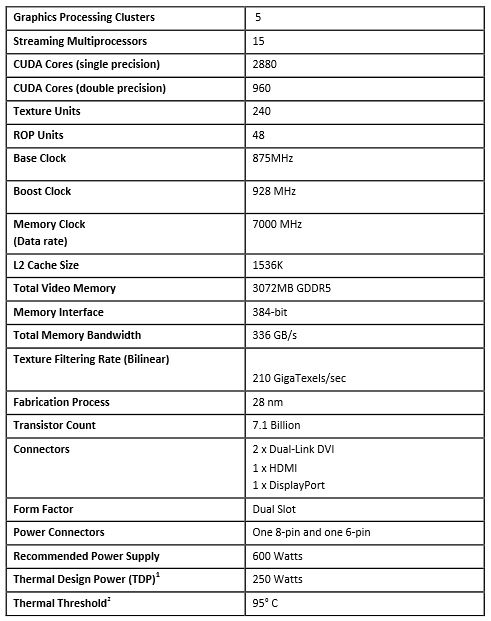 For those not on water the choice is much harder for sure! For single GPU a 780ti makes sense, but dual 290's on stock fan profiles are a serious contender.Quote

it truly is an amazing card, and for anyone wanting to spend that kind of money for whatever reason its awesome!!

haven't watched the video yet, but ill save that for later, from what ive read, its not worth getting rid of my 780 classy for this, as my classy overclocks quite well, and isnt far off the FPS the Ti produces!Quote

I want to see what can be done with this card with overvolting! If it overclocks that well by just upping the power limit slider, then upping the volts must give even better results.

I do feel sorry for all the people that bought the Titan though, everything from the 780, 290/x and now the 780 Ti is just a slap in the face to the people that spent £800 on it.Quote

ShaunB-91
Quote:
I guess those who have the Titan have deep pockets though so they won't be bothered. Has anybody on this forum got a Titan? I don't think there is..?Quote

tinytomlogan
Quote:
I do. Its in the box