The release of the GTX 1080 was one of those big changes that sometimes occur in the hardware world. Whilst the GTX 980 was hardly a slouch, the 1080 moved the goalposts significantly forwards, combining fantastic performance at regular 1080P options with enough horsepower to run at the higher resolutions which have quickly become the desirable offering for the high end gamer.

If you've been following the path of nVidia GPUs for any reasonable length of time you'll know that the main model is always impressive, but the Ti version is the one that everyone yearns for. So it wasn't much of a surprise when the rumour mill started churning about the possibility of a forthcoming GTX 1080 Ti. If we had one area of doubt it was that the Pascal GPU itself was so good we couldn't see how nVidia were going to really push the performance envelope so soon after the release of the GTX 1080.

With talk of around a 40% improvement above the main card you can imagine we were both hopeful but sceptical. After all, forty percent is a massive increase when the GTX 1080 had already monstered the GTX 980, and even more so when there has been so little time between the GTX 1080 release and the GTX 1080 Ti.

To say that on paper the Ti is a big improvement on the GTX 1080 is something of an understatement. Whilst the 1080 had 4 GPCs, here we have 6. Streaming multiprocessors are up from 20 to 28, whilst the number of CUDA Cores has seen a significant boost from 2560 up to 3584. It's the same story all the way down the chart. Memory has improved from 8GB to 11GB, and the interface is up from 256bit to 352bit, gaining 164 GB/s bandwidth on its predecessor. This has an effect on the all important Texture fill rate. Whereas the GTX 1080 managed a whopping 257.1 GigaTexels/sec, the GTX 1080 Ti hits a giddy 331.5 GT/s. It's amazing what you can do with 5 billion extra transistors. 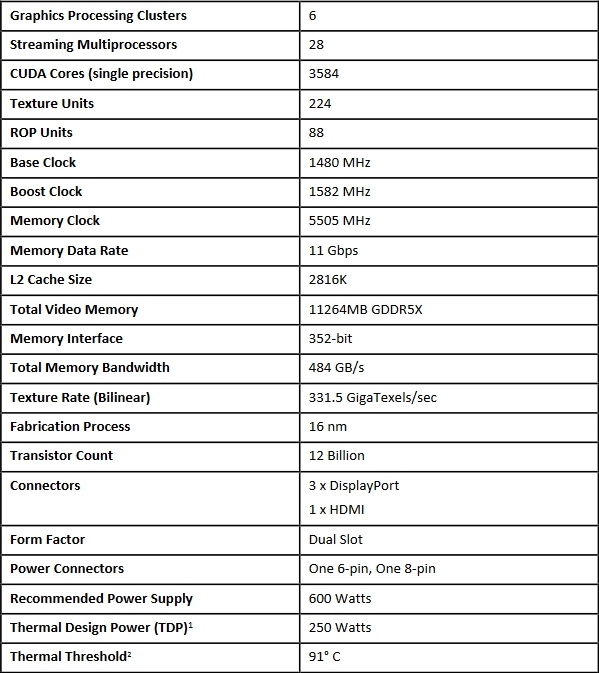 Shingara
Great review as normal, but something im wondering about the benchmarks that you did, wasnt the vega shown doing over 60 fps in 4k, could this be why nvidia have basically destroyed there titan with the ti ?Quote

AlienALX
Quote:
It's still not enough for 4k according to all of the reviews I have seen/read. Mostly thanks to the awful games we've been getting for the past year or so. Shame really.

Thanks for the review Tom, and of course the video !

AngryGoldfish
GG Nvidia. All the best to AMD now.

Thanks a lot, TTL. I'll have a proper look through this and the other reviews.Quote

tinytomlogan
With Vega 4K you dont know what the other settings were. We max our games out. You cant compare one results to another without identical rigs and game settings.Quote
Reply