There are some hardware products which slip out under the radar to burst onto the scene in a manner that leaves us all breathless with a need which, until that moment, we had didn't know we had. The same cannot be said of any flagship graphics card release.

Even if you were living under a rock, in the depths of Africa, with your fingers in your ears you'd still be aware that a new nVidia GPU was on the horizon in the shape of the Pascal. There is no technology followed quite as fervently as modern graphics, and nVidia's offerings are no exception. As much as Indie gaming might have brought pixel art back to the masses, as much as we all might deride games which are a technology demo and hopeless to actually play - hello The Order 1886 - we're all still eye-candy slaves, prostrating ourselves at the feet of whichever new god can make us slack-jawed in wonderment. After all, if shinier graphics wasn't a large part of why we're all here then our Atari 2600s would be in front of the TV rather than in the loft.

Whenever a new GPU appears it always brings with it a huge amount of marketing fluff explaining exactly why we want different APIs to give us new phong-shaded voxels in render pathlines an nth of a nanosecond faster than before*. In reality we all just want to know if our games will be smoother, our image quality better, and our wallets not too much lighter.

If we were in the aforementioned marketing world then it would be at this point that we'd pretend the nVidia GTX 980 Ti didn't exist, and merely look at how the GTX 1080 improves upon the GTX 980. We're not in the marketing business though, so we're going to compare like for like and in this case it means the current flagship nVidia GPU, the Maxwell architecture of the GTX 980 Ti, versus the Pascal architecture on today's sample GTX 1080. At first glance the GTX 1080 seems to be weirdly underpowered, despite us knowing it shouldn't be. Strap yourself in for a number bomb.

Compared to the current nVidia GTX 980 Ti there are 4 GPCs instead of 6, 20 SMs instead of 22, 2560 CUDA Cores rather than 2816, 16 fewer Texture Units and a whopping 32 fewer ROP Units. However, similarly to how an old 5 litre V8 only gave 200BHP but a modern 1 litre engine can get similar BHP, it's not about how much you have but what you do with it.

This wouldn't be the first nVidia card that made better use of its available CUDA Cores to provide a cooler, more efficient gaming experience whilst still managing to make our jaws drop in the visuals department. 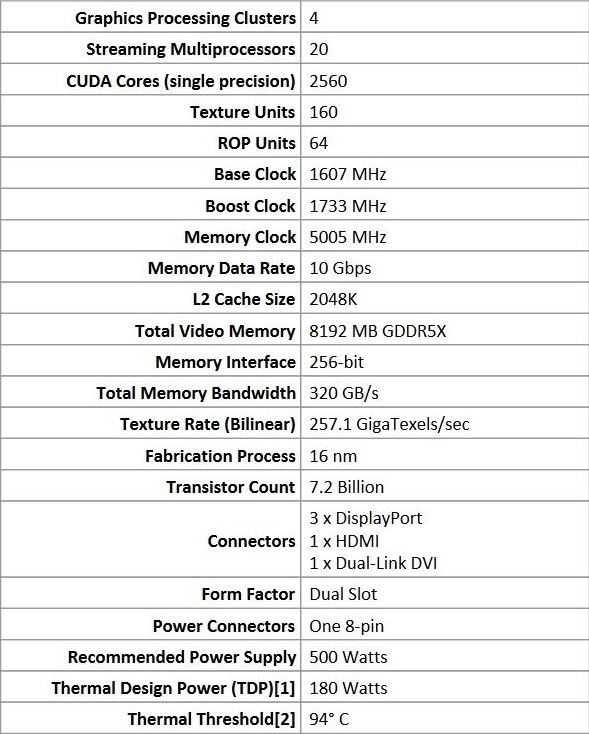 * We know phong-shaded voxels aren't a real thing. No need to write in.

B0GiE
Nice review and card. I think I will wait for the GTX 1080 Ti though.

rickyjb
Quote:
think this will be the same for a lot of people.Quote

RobM
Tom was this done in a closed case or an open test bench?
never mind I just saw its inside the case but was the side on?Quote

MiNo
Rocking a GTX780 this is very tempting indeed.

However, may I ask if it is possible to include OC scores also?

I'm comparing the 1080 scores with the (better) OC 980ti's and there are hardly any difference at all.

Looking at 2560x1440 resolution, the difference in Bioshock is 3 (three!) FPS and in Tomb Raider it is 6 (six!). As the numbers are in the >100 range we are talking a few percentage points difference. Less than 5% improvement.

To me, that means the 1080 'FE' is identical in performance to the best aftermarket version of the 980ti.

Or am I missing something?

PS: I'm *SO* looking forward to see what the chip can do with a bit more power and a bit more cooling!Quote

AngryGoldfish
Quote:
I can't remember whether Tom ever mentioned it in his early review, but that 980ti overclocked card he had absolutely denominated any other overclocked 980ti I'd ever seen. Like, I don't know how it was that powerful. It must have been in the top 5% of overclockers, not just reaching really high frequencies but actually scaling in equal measure. Maxwell cards scaled oddlythey didn't always scale equally. One 980ti at 1500/8000Mhz could be vastly different than another 980ti at the same clocks. Some of that was due to the annoying nature of GPU Boost 2.0 and the card throttling, but I found throttling by the normal 13Mhz every now and again did not amount to the kind of variances we are seeing here. Tom's 980ti was ridiculously powerful, far more than any other 980ti I'd seen reviewed. Maybe a Kingpin or HOF on water hit those numbers, but not that I've seen. To emphasis that point, check out Tomb Raiderthe ASUS 980 SLI setup is equal to his 980ti OC card. That's ridiculous and no other review I've seen shows anywhere near that kind of performance from a single 980ti. Also, Tom's AMD Fury performance numbers were always behind what others were getting, including myself. This shows how a particular driver and card can vary widely. Something was at play there that caused such vastly different results.Quote
Reply